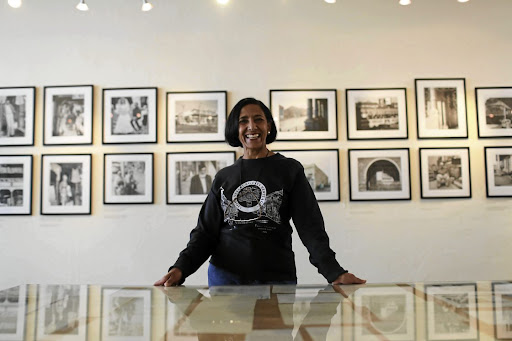 The founder and director of the Fietas Museum, Salma Patel.
Image: Supplied

Spanning just 25 streets between the Braamfontein and Brixton cemeteries in Johannesburg, the Fietas neighbourhood is desperately trying to claw back its historic value.

While some of the original families who escaped the relocations carried out under the Group Areas Act between 1969 and 1979 have held on to their family homes in Pageview and Vrededorp - which make up Fietas - most have scattered.

"This is land dispossession in action. My house is the only one left in its original form," said Salma Patel, curator of the Fietas Museum. It is in her family home in the old Surtee's/Kay's Fashion Building on 14th Street - a once-bustling shopping district - and the place where her parents got married.

MEC Hlengiwe Mavimbela is hoping that life-size statues of Sir Theophilus Shepstone and British monarch Queen Victoria will be removed in favour of a ...
News
9 months ago

"What better way is there for people to learn history than to visit a museum like this," she said, proudly showing off a collection of heyday Fietas photographs taken by photographer David Goldblatt. Decades ago Fietas was a close-knit, thriving community, home to several thousand coloureds, Malays, Indians, Chinese and whites.

"Life was vibrant and colourful here," Patel said. It's now an urban slum with 58 stands that have stood vacant for 43 years.

Indians were shifted to Lenasia, Malays and coloureds to Eldorado Park. Today there is little left of the Fietas she grew up in. The area has been renamed Pageview - a suburb she despondently calls "a wasteland of misery". She is gutted that the city's Urban Development Framework, drawn up in 2007, "has yet to see the light of day".

Eric Itzkin, head of heritage for the City of Johannesburg, acknowledged that the unresolved land claims in the area have caused much frustration and hurt, and said the area carried immense historic significance, encompassing six "blue plaque" heritage sites.

These are the Fietas Museum, the Home of Adam Asvat in 11th Street, the Malay Mosque in 23rd Street, "to be unveiled in the coming months", St Anthony's Church, the Dockrat Ruin and a public memorial on the corner of Krause and 11th Street.

Though disillusioned, Patel is determined to keep fighting for the vacant stands to be returned to their rightful owners and for the area to be restored. But she remains cynical as Heritage Day is marked once again, with little for her to celebrate.

Indians were shifted to Lenasia, Malays and coloureds to Eldorado Park

"The question now is, whose heritage do we recognise? What culture do we observe? There is not only one simple and correct version," she said.

Amateur historian Flo Bird has been researching the history of Johannesburg and promoting the preservation of its heritage. She is chair of the Parktown and Westcliff Heritage Trust, which she established in the mid-1980s. "There is something absolutely filthy going on there [Fietas]," she said.

"Clearly nobody cares if you are poor and unimportant. For things not to have changed there over 25 years means we are talking far beyond inefficiency. There is no reason why Fietas could not be flourishing again."

Emilia Potenza, curator of the temporarily closed Apartheid Museum, recently presented a paper on the parlous state of museums in the city for International Museums Day. She said while Covid had exacerbated the situation, the sector had been in crisis before the pandemic. The most recent casualties were Liliesleaf, the Trevor Huddleston Museum in Sophiatown, the Apartheid Museum and the Mandela House in Soweto.

Potenza said the Fietas Museum was a unique family-home museum and that there was "a lack of political will of the city to recognise the area and its historical value".

City of Joburg spokesperson Nthatise Modingoane did not respond to questions.

Heritage in our hands

No-one wants to be a grinch on Heritage Day weekend, but there is a fine line between the noble preservation of one’s own culture and the ignoble ...
Opinion & Analysis
9 months ago

5FM's Afternoon Drive team just finished their fifth annual Heritage Tour. Host Nick Hamman tells us about the adventure and the inspiration behind it
Lifestyle
9 months ago

After taking a break to find herself, Lungi Naidoo chatted to TshisaLIVE about her multi-genre EP 'Courage'.
TshisaLIVE
9 months ago