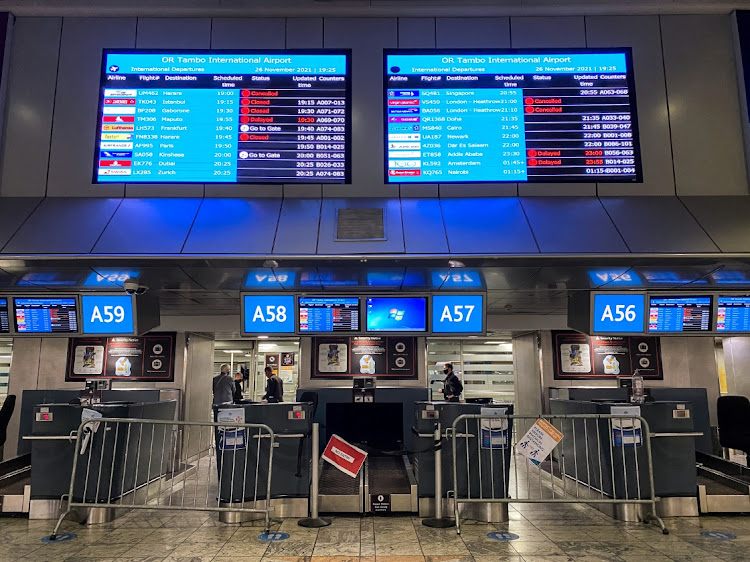 After attending many election campaign events that flouted Covid disaster regulations, President Cyril Ramaphosa faces a backlash if he ratchets up the lockdown on Sunday.

This was the warning from civil society leaders on Saturday as the National Coronavirus Command Council met in response to the emergence of the Omicron variant of the coronavirus identified by South African scientists this week.

The arrival of the variant, accompanied by a rapid rise in infections, especially in younger people, fuelled fresh calls for compulsory vaccinations as the daily average rate of jabs slumped to below 100,000 in the last week.

Ramaphosa is expected to host another “family meeting” on Sunday.

Mauritius became the latest country to ban flights from SA on Saturday. Thursday's announcement that Omicron has quickly become the dominant variant in of SA sparked travel curbs by the UK, the US, the Netherlands, Australia, Canada, Thailand, Turkey, Brazil, Sri Lanka, the United Arab Emirates, Jordan, Morocco, Egypt, Iran, Israel and Singapore. The EU urged member states to bar travellers from SA.

Thousands of foreign would-be international visitors immediately cancelled bookings, and the department of international relations and & co-operation said the travel bans were “akin to punishing SA for its advanced genomic sequencing and the ability to detect new variants quicker”.

Vaccinate all of us, don't lock us down again

Since the discovery of the Omicron variant of the coronavirus, SA has been treated as a pariah. This is unfair, but has emphasised the need to pursue ...
Opinion & Analysis
8 months ago

Minister Naledi Pandor said: “This pandemic requires collaboration and sharing of expertise. Our immediate concern is the damage that these restrictions are causing to families, the travel and tourism industries and business.”

Business for SA chair Martin Kingston said Ramaphosa should acknowledge the ramifications of the travel bans and “the precarious state of the economy, and tourism in particular”.

He urged the president to avoid the economic damage of a stricter lockdown and instead take steps to raise vaccination rates.

“There are two areas that can fundamentally increase and improve the vaccination rate:  restricted access to venues and vaccine mandates,” he said.

The government should sanction or support both “as a matter of extreme urgency”.

“It doesn’t need to impose it itself, but obviously we would welcome it if it did, but we do believe they need to acknowledge the need now to aggressively drive the vaccination rate, which is the only way we are going to curb transmission,” Kingston said.

Adrian Gardiner, chair of luxury hotel operator The Mantis Group, called the flood of cancellations “an absolute nightmare”, and David Frost, CEO of the Southern Africa Tourism Services Association, said it was a “horror show” that could be the final straw for businesses that had been “hanging on by their fingertips”.

A Johannesburg church leader said tighter curbs on gatherings, which were dramatically relaxed during the campaign for the November 1 local elections, would be hypocritical.

Pastor Chris Mathebula of Hope Restoration Ministries in Kempton Park said: “We are not going to accept any restriction measures on gatherings because as the church we have never stopped complying with the precautionary measures, unlike the politicians who were campaigning while breaking all the Covid-19 rules and regulations.

“How will the president explain a hard lockdown after the elections, because when they were campaigning it’s like Covid-19 gave them space to campaign and now it has miraculously returned.”

Mosa Moshabela, acting deputy vice-chancellor of research and innovation at the University of KwaZulu-Natal, said Ramaphosa will struggle to convince South Africans to comply with lockdown rules after an election campaign that ignored them.

“They are going to find it difficult for people to even take them seriously. They must apologise and say, ‘We did not expect a new variant,’" he said.

Minister in the presidency Mondli Gungubele admitted in a post-cabinet briefing on Thursday that some campaign events ignored safety protocols, including social distancing.

Moshabela was among several experts calling for vaccinations to be compulsory. “SA needs to move more firmly to mandatory vaccination until we at least have a high coverage of about 70%," he said.

Keymanthri Moodley, an expert in bioethics at Stellenbosch University, said instead of tightening the lockdown “we should be implementing a mandatory vaccine policy with immediate effect to prevent any more variants developing. This decision has been delayed unnecessarily.”

She said the arrival of Omicron — the first since Delta to be declared a “variant of concern” by the World Health Organisation — is “exactly what we have been concerned about all along”.

Stellenbosch University virologist Wolfgang Preiser said the cluster outbreaks in Gauteng warranted a return to stricter measures, but above all people should see the arrival of Omicron as “a clarion call to get their vaccines now”.

Black Business Council CEO Kganki Matabane also called for mandatory vaccines rather than stricter restrictions that would cripple the economy.

His call was echoed by Restaurant Collective spokesperson Grace Harding, who said any form of lockdown “will be like a death sentence”.

She added: “We urge government to stop living from crisis to crisis and to focus on a co-ordinated drive to get the population vaccinated so we can continue with a functional economy where we are healthy and safe.”

23.3-million: Adults not yet vaccinated

The convener of the National Liquor Traders Council, Lucky Ntimane, said: “We expect the president to be guided by science and common sense.

"We will view any decision ...  to ban or restrict the sale of alcohol as premeditated economic sabotage aimed at destroying our people and subjecting them to poverty.”

Mary-Anne Davies, a University of Cape Town expert in infectious diseases, said: “The single most important thing we can do is to increase vaccine coverage as rapidly as possible in the most vulnerable groups and this is where energies should be directed, rather than at lockdowns at this stage.”

Dan Mafora, researcher for the Council for the Advancement of the South African Constitution, said vaccine mandates would limit citizens’ right to freedom and security of the person. “The question that would remain is whether such a limitation would be justifiable in terms of the constitution.”

The government would need to prove that a vaccine mandate is justified by whatever risk unvaccinated people pose to vulnerable groups such as immunocompromised people who cannot take the vaccine for medical reasons, he added.

“They would have to prove that unvaccinated people put strain on the health system, because of the likelihood of severe disease and hospitalisation, and show why that negatively affects the rights of people who may need to use the health system but are prevented because of a shortage of beds [and] lack of resources,” he said.

Wits University vaccinology expert Shabir Madhi said a stricter lockdown would be the “worst decision” and would show that the decision-makers “still have the pipe dream that lockdowns have achieved much in SA”. 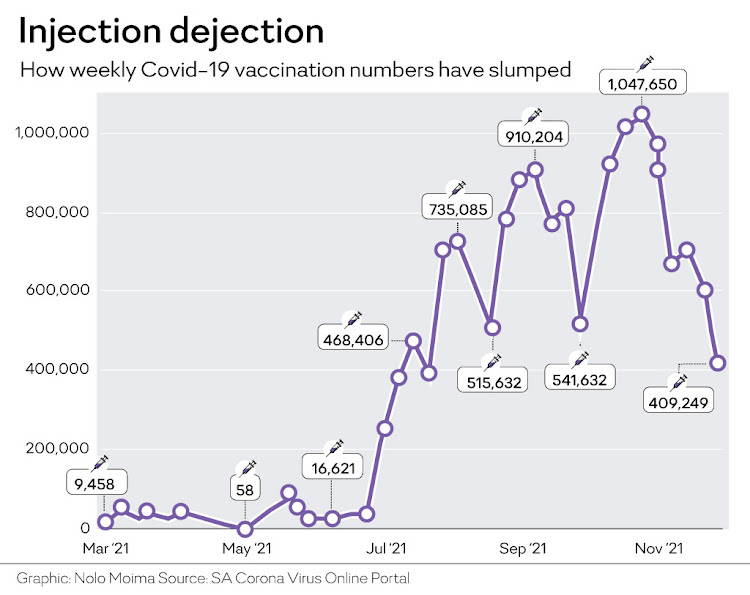 The only plus is that it will be over a “longer period of time that the same number of people get infected” and so higher levels of restriction are only needed if health facilities are coming under pressure.

But even then, he said, “we need a regional approach and not national, as the resurgence will differ in timing across provinces as was the case with the third wave”.

Davies said restrictive measures are not warranted if hospital admissions are stable but that this “will need to be closely watched” so that reducing pressure on the health system could be “balanced with the socioeconomic harm that restrictions cause”.

There is currently “much uncertainty about the implications of the variant in terms of disease severity, transmissibility and ability to escape immunity” but indications are that protection by the vaccine against severe disease and death “will be largely maintained”.

All the experts agreed indoor gatherings in crowded or poorly ventilated spaces should be avoided, and mask-wearing maintained.

Veronica Ueckermann, adjunct professor at the University of Pretoria’s internal medicine department and critical care specialist, said with increased numbers of consumers attending Black Friday sales for longer periods of time, “this may significantly increase the risk for Covid-19 transmission”.

Ueckermann said she hoped the news of a new variant would have encouraged shoppers to “pursue online options for Black Friday”.​

The nearly 20m doses in SA's vaccine stockpile should be used to give booster jabs to high-risk groups, and at least 85% of those aged over 50 need ...
News
8 months ago

Omicron: A small ou with a big sting