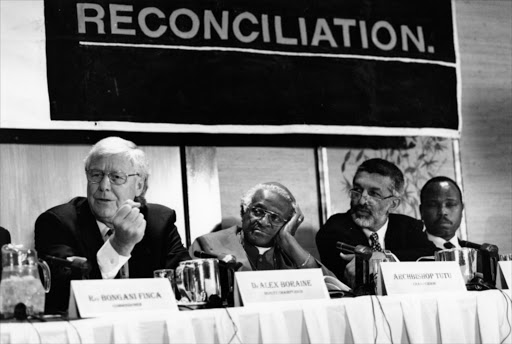 In 1988, Khotso House was bombed by security police who were led by Eugene de Kock.

Former minister of state security Adriaan Vlok and former police commissioner General Johan van der Merwe applied for amnesty to the Truth and Reconciliation Commission for the bombing, in which 19 people were injured. Khotso House was targeted because it housed the office of the South African Council of Churches and other anti-apartheid groups.

Today a small, dreary office in this building still looks very much like it must have back in the '80s.

Eleven years after the commission's final report was handed to the president, members of the Khulumani Support Group - the country's largest organisation for victims of apartheid-era human rights violations - gathered here to talk about their troubles, and to find answers.

I met six members of the organisation, not all of whom went to the TRC hearings, not all of them among the 19 000 victims given reparations - but all recognised by the support group as part of its database of more than 100 000 victims of apartheid-era violations.

Most of them were unemployed and living in the same conditions in which they had lived during apartheid, when they were uprooted by the violence sweeping across the townships of Johannesburg and the East Rand in the late '80s and early '90s.

Although the commission recommended that victims be given an annual reparation of about R21 000 for five years, then-president Thabo Mbeki took the decision to pay each of the 19 000 recognised victims a once-off payment of R30 000, promising that the government would also put in place "programmes to provide medical benefits, educational assistance and provision of housing", and assuring the nation that the government was "convinced that, to the millions who spared neither life nor limb in struggle, there is no bigger prize than freedom itself, and a continuing struggle to build a better life for all".

The victims do not agree.

Andrew Mbatha, whose son Jeffrey disappeared during violence in Katlehong in 1993, is still trying to find out what happened to him. For him and many other victims, he said, "apartheid is not over. We also fought against it, to be free, but we are not free. We want the whole world to know that there are still many people who are under pressure in South Africa. They can't fight for their rights."

Although the TRC is remembered as a miracle process by many outside South Africa, for those still searching for answers and for members of civil society involved in the battle to get those answers, the commission's final report was not meant to close the door on the process.

Instead it was a stepping stone towards the continuation of the commission's work to help South Africa cross the historic bridge between its past and present.

It was announced last year that the R1.9-billion in the President's Fund would be released to pay reparations to 18 communities, but Khulumani and other organisations have questioned how the government decided on its selection of communities - especially as the TRC had identified 128 communities eligible for such reparations.

block_quotes_start I want to prosecute him, but I’m scared to open a case. The apartheid system changed us. We don't trust the police because they are the ones who used to kill us block_quotes_end

The support group has also been concerned that the money would be used to subsidise infrastructure projects that were the responsibility of government departments.

When it came to prosecutions of perpetrators of political violence who had either failed to apply for amnesty or been denied it, Mbeki was adamant that there would be "no general amnesty. Any such approach ... would fly in the face of the TRC process and subtract from the principle of accountability."

In more than a decade there have been no successful prosecutions arising out of the commission hearings, and of the more than 400 cases handed over by the commission to the National Prosecuting Authority, only 37 were deemed worthy of further investigation.

The Priority Crimes Litigation Unit charged with handling such cases has been severely hamstrung by political interference and diminished investigation capacity.

In an affidavit, former head Anton Ackermann says he was "stopped from pursuing the investigation of the so-called political cases arising out of South Africa's past".

He was relieved of his duties following the suspension of then-national director of public prosecutions Vusi Pikoli in 2007. Pikoli said he was placed under pressure by former justice minister Brigitte Mabandla not to pursue the TRC cases, and claimed that there was an atmosphere of fear in the government - cultivated by former police commissioner Jackie Selebi - that the NPA would investigate members of the ANC for apartheid-era activities.

block_quotes_start Luckily, the perpetrator is still alive, but I worry that if he leaves this world then there's no evidence of the torture I received block_quotes_end

All of which was little solace to 70-year-old Thabo Shabangu, who did not get a chance to go to the TRC hearings and tell his story of being shot by police in Thokoza in 1990.

According to Shabangu, the policeman who had shot him is still alive.

"I want to prosecute him, but I'm scared to open a case. The apartheid system changed us. We don't trust the police because they are the ones who used to kill us. I need a prosecution and my government must do something so that we can prosecute those people," he said.

Pule Sempe, a Khulumani member who was arrested, tortured and detained by police in 1986, said that one of the policemen responsible for his ordeal still lived around the corner from him in Carletonville, but never applied for amnesty.

"Our government says we must forgive and forget. I won't say they must be prosecuted, but they must be brought to justice. I just want the truth and, when I hear the truth, then I can say: 'I forgive you.' ... It seems the government is on the side of the perpetrators.

"Luckily, the perpetrator is still alive, but I worry that if he leaves this world then there's no evidence of the torture I received," he said.

The Missing Persons Task Team, established to find the remains of apartheid victims, has so far exhumed 94 sets of human remains - 74 of which have been returned to their families for reburial.

However, the task team was only sanctioned to investigate the 500 cases handed over by the commission - while Marjorie Jobson, director of Khulumani, said the organisation had a database of 6 800 cases. She said there had been no commitment from the state to investigate these cases, "because what they always use is the excuse that 'we only have to deal with issues presented to the [commission]'. This thing of political abductions was huge ... [but] there's a huge lack of will to make this a core business of the NPA."

Elizabeth Mokoena, whose husband disappeared in Sebokeng in 1993, told her story at the commission hearings.

"They promised to help but they didn't. I thought the government could help us to find those people who were missing. Until now the government hasn't done anything," she said.

Mbatha said he had given up hope that he would see his son again. " Too many years have passed and I see nothing that has happened for us. I'm still living in my mother's house. I'm 62, but I can't sleep. In the street they call me with my son's name. They ask me: 'Where's Jeffrey?' That causes me more pain.

"If I can get my son's bones, maybe I can feel better because I can take his bones and put them in the grave with his mother."

Leaving Khotso House after speaking to victims, it was hard not to feel that many people whose grievances were meant to be addressed by the commission have been victimised twice: once by the injustices of apartheid, and now by the lack of political will of the post-apartheid government.