The East London City Hall is an oxblood-red Victorian structure whose building was completed 117 years ago. That this striking symbol of colonisation was the venue for the first Truth and Reconciliation Commission (TRC) hearings on April 15 1996 is rather paradoxical. 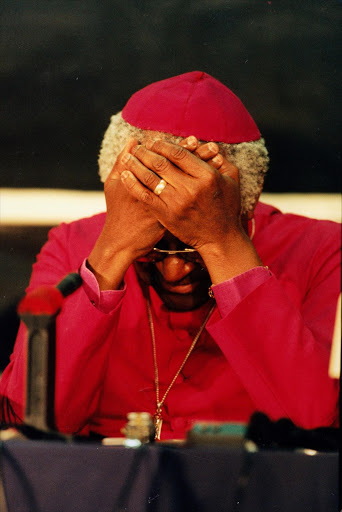 Archbishop Emeritus Desmond Tutu breaks down during hearings of the Truth and Reconciliation Commission in 1997.
Image: RAYMOND PRESTON

Forgiveness and reconciliation are hardly the first things that spring to mind when one thinks of colonisation. But perhaps the TRC chose this venue for the symbolism behind it: what better place for the oppressed to publicly and tearfully express forgiveness for their former oppressors than in the house that colonialism built?

The TRC's aim was restorative justice following the end of apartheid. People who had been identified by the commission as victims of human-rights violations testified publicly about their experiences, while the perpetrators who came forward and were deemed truthful by the commission received amnesty.

If you watch footage of the hearings (some of it is available on the SABC's YouTube channel), you'll witness a theatre of grief: victims sharing horrific stories, many collapsing into fits of tears, people hugging one another, some even fainting.

And who could forget that iconic image of Archbishop Desmond Tutu, chairman of the committee, in his purple robes, weeping with his head on the table on the first day of proceedings?

There was undoubtedly something cathartic about the process for a lot of the victims. The experience of sharing how they had been violated, or their loved ones had been victims of violence (some of whom simply vanished, a common apartheid story).

In its 1998 report, the TRC described the mood as mostly "sombre and dignified; at others, there was an undercurrent of anger. Yet always there was an awareness of a spirit of compassion and acceptance".

The TRC operated under the tag line "Healing Our Nation", through truth and forgiveness. But 20 years later, what is its legacy?

What has it done not only for South Africa as a country, but for ordinary South Africans?

To be frank, very little.

The TRC as an idea was a noble one, but it was both too ambitious for its own good and not inclusive enough to be effective. How could we expect to "heal" 34 years of trauma (crimes and violations had to have been committed between March 1960 and 1994 to be heard) with words and hugs?

One of the major failings of the TRC was that it focused on politically motivated crimes and human-rights abuses.

That is problematic because it reduces apartheid to politics - and little else. It erases the fact that racism was the root of apartheid, which downplays white supremacy, making it easier for systematic racism and white privilege to continue to thrive largely uninterrupted.

The politicisation of forgiveness and reconciliation also leaves "ordinary" folk out in the cold, as though a death or violation had to be somehow political to matter. In a report, the Khulumani Support Group said the TRC had also failed women, as "rape and gender-based violence did not fall within the criteria of a political act".

One of the documents from Wits University's Traces of Truth project (which preserves and archives documents and content relating to the TRC) points out that "nowhere in the victims' hearings ... were the stories told of the everyday violence of the apartheid system; the experiences of forced removals, systematic discrimination, forced labour, targeted impoverishment and the institutional and psychological violence that was integral to the apartheid system".

Because of this and the commission's failure to address the structural racism of the apartheid system, continues the report, it has made it easier for apartheid beneficiaries to deny that they benefited from the system, directly or indirectly.

I agree: the TRC and other public shows of forgiveness like it are the reason black people are told to "get over apartheid" because it was so long ago (news flash: it wasn't). The farcical Rainbow Nation parade has thrived on muzzling black pain and easing white guilt.

The idea that loving thy neighbour would suffice in helping heal our collective trauma was flawed from the beginning.

South Africans today are always complaining about their lack of trust in the criminal-justice system and the high crime rate we all live with on a daily basis.

If criminals were to rot in jail for their atrocities. That would be a great start towards reconciliation.

Imagine if you were told that all that those who have robbed, raped or murdered your loved ones have to do is apologise for their crimes, and that you should forgive them because they're remorseful and have been brave enough to tell the truth: How would you feel?

Imagine if you - as my best friend's mother once did - had to sit in the same room as an apartheid spy master in one of Johannesburg's posh private schools during parents' evening. How would you feel if you had to sit next to someone who got away with killing your family, friends, associates or people like you?

When in post-democratic South Africa has the justice system worked as it should? Surely if people who have committed any such atrocities belong in jail, then many of the same South Africans living behind high walls and running businesses would also be in jail, wouldn't they?

The justice system started failing us when only a handful of apartheid criminals paid for their crimes, in varying degrees. We chose "reconciliation" - hugs and fake unity - over retribution.

Nay, it was chosen for us. We were told to turn the other cheek and forgive criminals, many of whom were and continue to be unapologetic about their crimes.

Only in South Africa are people expected to break bread with their torturers, murderers and oppressors, all in the name of unity, a legacy of the TRC and Mandela's government.

To be fair, the TRC was aware of its own limitations.

Writing for the Mail & Guardian in 2014, Tutu stated that the commission was meant to be "a beginning, not an end".

He blamed the post-Mandela government for the lack of progress after the TRC, saying: "I do not believe that Mandela would have left the commission's business so scandalously unfinished, as his successors have. By 'unfinished business' I refer specifically to the fact that the level of reparation recommended by the commission was not enacted."

Indeed, the TRC made some recommendations which, if implemented, would have made more of a difference than the commission itself.

The TRC report published in 1998 declared that "reconciliation without cost and pain is cheap, shallow and must be spurned".

The commission also recommended that "a scheme be put into place to enable those who benefited from apartheid policies to contribute towards the alleviation of poverty", mentioning a wealth tax as one option.

While many who testified before the commission were granted amnesty for their crimes, those who did not receive amnesty for whatever reason were meant to face criminal prosecution.

Former national director of public prosecutions Vusi Pikoli said last yearthat "political interference" was the reason that investigations in cases recommended for prosecution by the commission were "effectively barred or delayed".

But it seems some progress is finally being made, with Umkhonto weSizwe operative Nokuthula Simelane's alleged killers (four members of an apartheid hit squad) facing prosecution. This is the first prosecution to stem from the TRC - and the NPA says there is more to come.

Could it be that those in charge have finally woken up to the fact that for reconciliation to become a reality, it requires more than an apartheid-era minister to wash his victims' feet and deliver food parcels to a township?

Good on Adriaan Vlok for publicly trying to cleanse himself of the shame of his actions - but you know what would be even better? If criminals were to rot in jail for their atrocities. That would be a great start towards reconciliation. I'm sure many victims of apartheid would prefer that instead of tears and a hug.