Mampara of the year: Hlaudi Motsoeneng 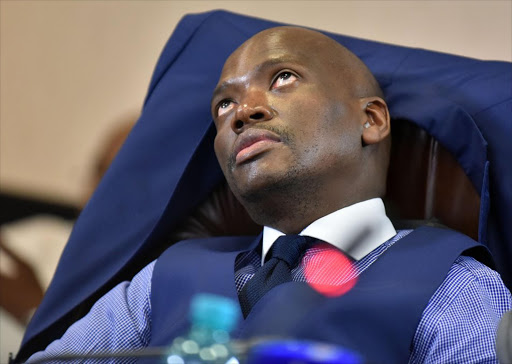 The self-proclaimed "acamedic intellectual" clinched this one by a landslide. Our readers have crowned Hlaudi Motsoeneng as the indisputable Mampara of 2016.

Other smallanyana Mamparas tried, but none came close to Cloudy's eccentric buffoonery. Despite revelations that he had lied about having a matric certificate, this Mampara rose higher and higher up the ranks at the SABC's Fawlty Towers - masterminding the removal of anyone who dared to question his capricious decisions.

From the senseless sale of SABC archives to MultiChoice to banning footage of violent protests from our screens and the introduction of a blanket 90% local music quota at all SABC radio stations, this Mampara has earned the dubious distinction of having single-handedly run the public broadcaster into the ground.

In second place came the national director of public prosecutions, Sheepy Shaun Abrahams, whose removal No1 is considering after they had tea at Luthuli House.

Sheepy Shaun may have missed out on the big prize, but he gave Hlaudi a run for his money, displaying the rare skill of repeatedly humiliating himself in public. It takes a Mampara of a special kind to call a press conference and announce a decision to charge someone, and withdraw the charges just weeks later.

In third place came Penny Sparrow for her Facebook rant in which she complained about "monkeys" who packed Durban's beaches last festive season.

Our readers had fun in helping us choose our Mampara this year. @srampau wrote on our Twitter timeline: "Tough! Can we not just give each one a crown? All have worked equally hard, it wouldn't be fair to one & not the other", referring to the Claudy One and Sheepy Shaun.

Others agreed with @srampau, saying the award should go to more than one person. "Come on - 2016 was a good year for mamparas, we need at least three winners this year," suggested @CannaBizArt.

But the overwhelming majority chose the former COO of CEOs as the 2016 winner. Reader Padma Magan wrote: "I nominate Hlaudi Motsoeneng as Mampara of the year 2016. He is no different in character [to] our No1. So Hlaudi should also be given life membership of Mamparadom as his good mate No1."

Richard Tomlinson, a reader from Port Elizabeth, suggested adding Minister of Mis-Communication Faith Muthambi. "But the prize must surely go to the red-eyed self-promoter and self-paymaster-general of the national broadcaster, Cloud Nine.

"Since he was first appointed, I have wondered how SABC standards could have dropped so low for a matric to qualify anyone for the position of head honcho in their organisation - and he did not even have that to his name - which of course made him the perfect appointee!"

Close, but there can only be one winner!