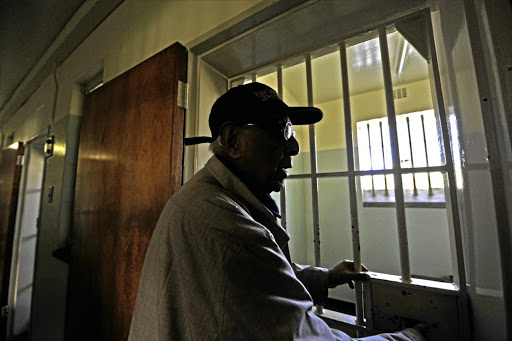 Ahmed Kathrada peers into a cell during a tour of Robben Island in 2015.
Image: GALLO IMAGES

There is one memory of his time in prison that Kathy never jokes about. It was the night when terror was brought to bear on B Section, Robben Island. They lived with a small group of other prisoners from other organisations and, in one case, from another country.

Prisoners from the South West African People's Organisation (Swapo) in Namibia were on hunger strike and the B Section prisoners joined in, in solidarity with them.

"It was a Friday night, bitterly cold, and we were on hunger strike. In other words, we were not eating at all. They wanted to break our hunger strike. They must have thought that the way to do it was to raid our cells.

At eight o'clock, when we were all locked up and feeling hungry, they opened our doors suddenly, ordered us to strip completely naked and stand against the wall like this."

He raises both hands in the air, conjuring up the image of surrender.

It is excruciating to imagine Kathy, Mandela and Walter Sisulu and their comrades, then aged between forty and sixty, standing naked against a wall, at the mercy of a band of young thugs.

"They began pretending to be searching for newspapers, because until 1980, we didn't have newspapers. Anything we had we smuggled in. We even smuggled in a radio once. But when its batteries ran out we had to hide it. So we buried it.

"They took their time, they didn't find anything but it was punishment because they wanted to break the hunger strike."

This was the night their patience and discipline were tested to the limit. His worst moment in prison.

Everybody got a shock. We all thought it must have been a heart attack. The warders also thought he had a heart attack so they quickly told us to get dressed. They said, 'Dress up!'

"Fortunately it wasn't a heart attack, it was stress. You know, he was the oldest amongst us and we were worried.

"But they took a long time to enjoy our suffering. So what I am saying is that required patience. It was a Friday night, many of them were drunk, as they were on Friday nights, and they were young, led by a vicious chap, Fourie — a lieutenant, very bad fellow. So again, had we done anything wrong these drunk chaps could have assaulted us.

They could have assaulted us badly. But that required patience. It didn't need anyone to command us to be patient; we just thought that was the right thing to do because we were in separate cells and the things only ended when Govan collapsed."

"It must have been terrifying."

block_quotes_start Fortunately it wasn't a heart attack, it was stress. You know, he was the oldest amongst us and we were worried block_quotes_end

"Were you very angry?"

"Well, there is anger, helplessness, you know you can't do anything. But that required discipline and patience."

Oddly, Kathy smiles often during the telling of this story.

"Why do you smile about this, Kathy?"

"If you don't smile about these things, then you suffer. The other thing they did to break the hunger strike was with our morning porridge — normally you got porridge with water but to break our hunger strike they used to add fat. But they never succeeded."

"How long did the hunger strikes usually last?"

"Two weeks at a time, three weeks at most."

"But you were punished in other ways too, in prison, weren't you?"

"I was once sentenced, without a hearing, to solitary confinement for six months. You are given only a Bible. You are not allowed to talk. You are only taken out of your cell twice a day for thirty minutes of exercise."

"Was it difficult, at first, to adjust to the isolation?"

"No, I adjusted easily because I had been to jail so many times before."

The first time Kathy was in jail he was seventeen years old and a fellow inmate was his former Standard Three teacher, Murvy Thandray.

"So did you have to behave?"

"He was still my teacher. In jail it was still 'Sir', and we were in the same cell but that distance between teacher and pupil remained."

"And did he behave in a way that you thought was worth emulating?"

"He was very strict, more strict than necessary. We worked in offices in Kort Street, the ANC office, Youth League office, the Indian Youth Congress office. All with partitions between them. He was strict about everything: time, the use of the Roneo machine, the machine we used to make pamphlets. You know, there were no faxes at that time."

"Right, faxes had only just come in when you were released."

Kathy can hardly mention a fax machine without talking about the first time he heard about it. It still amuses him.

"The day before our release in 1989, a prison official came to us and said, 'I've received a fax. You are going to be released tomorrow'."

"I responded with, 'What's a fax?'," he laughs. "Instead of the dancing and joy and happiness, I wanted to know what was this 'fax'."

We meander back to Mr Thandray.

"I was thinking about the Roneo machine because of how I was once pulled up by him. In the Youth Congress office when we used the Roneo machine I once didn't clean it and close it up properly. Now he could have just chastised me but he wrote a letter to me," he chuckles. "From one office to the other — a strict disciplinarian."

"Well, I can't remember the wording but he tried to point out how to be responsible. 'If you use a machine you must, before you close it, you must see that it's in order and close it properly, so that the next person can use it.'"

"And how did you feel about being chastised by letter?"

'"Well, I was still his pupil, so even if there was some anger I had to contain myself and listen to him."

Ahmed "Kathy" Kathrada was one of Nelson Mandela's closest friends. Born on August 21 1929 in Schweizer-Reneke, he entered politics at the age of 12 when he joined a club in Johannesburg run by the Young Communist League.

Kathrada was first jailed at 17 for taking part in the passive resistance campaign. He received his first banning orders in 1954 and was arrested several times for breaking them.

In July 1963 he was arrested in the police raid on Liliesleaf Farm, which resulted in the Rivonia Trial in which Mandela and others received life sentences. Kathrada was in prison for 26 years, 18 of them on Robben Island. A few months after his release in 1989, the ANC was unbanned.