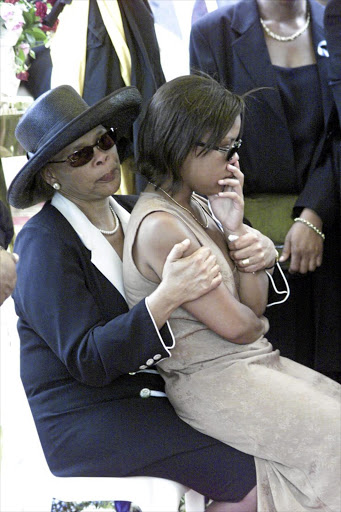 Lindiwe Hani sits on her mother Limpho's lap at the funeral of her sister Khwezi.
Image: VELI NHLAPO

All Lindiwe Hani wanted as a little girl was a middle-class family life. Something out of 'The Cosby Show'.

For a while, after her father Chris returned to South Africa in the early '90s after the release of Nelson Mandela, it seemed her dream would come true.

Then, on April 10 1993, everything changed. Her father was gunned down in the driveway of the family's home in Dawn Park, Johannesburg. He was killed by right-wing assassins who had hoped the death would ignite a race war.

"I remember hearing the words: 'Your father's been shot', and at that moment my small voice asked: 'Which hospital is he in?' And then my mother replied: 'Daddy has been shot dead'."

In her tell-all memoir, Being Chris Hani's Daughter, Lindiwe reveals the trauma that followed and the repercussions on her life.

In 1991, the last apartheid president, FW de Klerk, announced the unbanning of the liberation movements, including the ANC and the SACP, led by her father.

"When I heard those words I was so happy that finally we were going to live like the Huxtable family from The Cosby Show.

"They represented the life I wanted, the life of a black middle-class family with both parents working," she said in an interview with the Sunday Times.

"I remember thinking, finally, Daddy is coming home and we're going to live like a normal family."

When her father wasn't at home, Lindiwe, the youngest of Hani's three daughters, would spend a lot of time with her friend's family because they represented the family she wanted.

"I liked the security of a father figure and longed for it."

Hani taught his daughter how to dive and master all the different swimming strokes in their pool, and when he went jogging, she would ride behind him on her bicycle. He would ask her to pour him his favourite drink, brandy and Coke. The task made her feel special.

"Life seemed normal. We were happy. Then, in just over two years, the life I had been promised was taken away from me forever.

"When Daddy died, something inside of me died.

"I found it hard to communicate. I became a shadow of my former self."

The day before her father was assassinated, Lindiwe and her mother had driven to Lesotho for the Easter holidays.

She writes in her book: "Before we left, he came to the car to say goodbye. As we drove away, something urged me to look back. The last image I saw before turning the corner was Daddy standing at the garage with a hand up, waving goodbye. For a moment I was overcome with a deep pang of sadness at my father standing there alone in the driveway."

During the time of grief the Hani daughters, Momo, Khwezi and Lindiwe, were given prescription sleeping pills and Lindiwe's addictive personality started revealing itself.

"I started relying on the pills and then realised they were not working anymore. I started mixing them with alcohol."

At the age of 14 she had her first experience of losing herself in alcohol. Then she started mixing it with marijuana.

block_quotes_start One of the bonds Lindiwe has formed is with Janusz Walus, the man who pulled the trigger of the gun that killed her father block_quotes_end

"I loved being high. It just made me feel at ease and helped me carry on."

After matriculating in 1998 she was accepted at the University of Cape Town to study for a Bachelor of Arts in English and communication. It was in Cape Town where she reconnected with her childhood love, Sikhulu, her best friend's brother.

Sikhulu was four years older and their love reignited the moment they saw each other. She lost her virginity to Sikhulu and when she became pregnant decided to have an abortion.

"We both agreed that we were too young and believed that we were soulmates, so therefore there was all the time to make more kids when we get older."

A month after the abortion Sikhulu died in a car crash. Lindiwe said the pressure of being a Hani and being expected to lead an exemplary life contributed to her drug addiction.

She went to a psychiatric institution under a false name to protect the family reputation. She dropped out of university and began using cocaine, as did with Khwezi.

"We would call each other and we both knew we were f**ked, and laugh it off."

More heartbreak was to follow. Less than a year after she lost her boyfriend, Khwezi died.

"We were told that she died from asthma whilst sleeping but when we went to identify her body she had a hole in her head that no one can explain to this day," said Lindiwe.

A year after losing her sister, Lindiwe had a daughter, Khaya. Even though her baby was "the light that soothed her pain", she couldn't stop taking drugs.

"I thought my life was finally coming together but then I realised that I brought Khaya into the world and I had not dealt with my problems. Every time I picked up the phone, I called the next drug dealer.

"The turning point of my life was when I left Khaya with her nanny and didn't come back home because I was drugging at some friend's house.

"I realised that I had spent my 20s drugged and high but one thing I told myself was I would never hurt Khaya."

Lindiwe decided to check into rehab in 2014.

In the book she mentions that one of the lessons she learnt from rehab was to connect with people again, to forge real and deep friendships.

One of the bonds Lindiwe has formed is with Janusz Walus, the man who pulled the trigger of the gun that killed her father. She has visited him a couple of times in prison.

"After meeting Clive I still felt like he still made excuses.

"He was still justifying why my father had to die, so I felt no empathy for him.

"However, I have so much empathy for the man who pulled the trigger and left my father in a pool of blood on our driveway in 1993.

"Imagine walking into prison to see your father's killer and he welcomes you with a smile and tells you how proud he is of you.

"I looked straight into his blue, cold eyes, sat down and told him I'm not going to blindside him. I'm visiting him because I'm writing a book and I need answers."

Lindiwe said Walus told her he would tell her everything. In the book, Walus vividly describes the morning he shot her father.

"I saw your father get into the car.

"He was wearing a tracksuit and I followed him to the shops where it looked like he bought a newspaper.

"I was very surprised that he was alone, without guards. I decided to seize this opportunity.

"When he got out of his car, I got out of mine. I called his name. I did not want to shoot him in the back.

"He turned to me and I shot him. He fell down and I went closer and shot him again, twice in the head."