How to be a Gupta

To get a head start in the race for power and riches, follow this manual 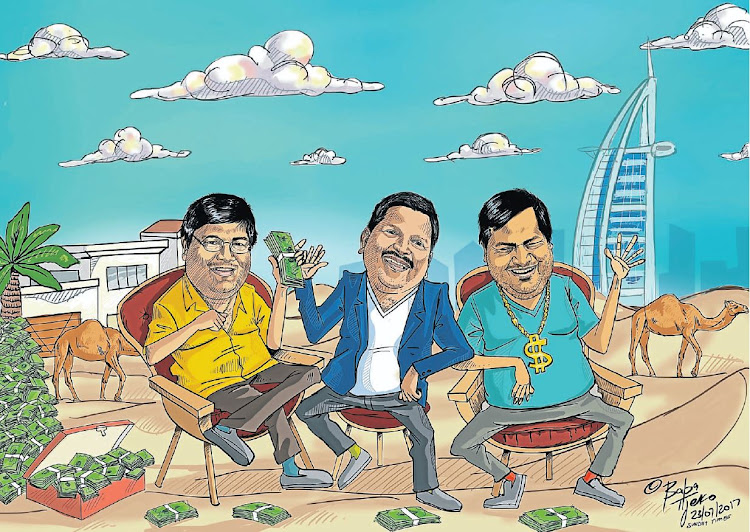 When Atul Gupta packed his suitcase in 1993 and waved goodbye to mama, papa and the dusty, fly-infested city of Saharanpur, few could have imaged the astonishing trajectory the family fortunes would follow in his adopted land.

It is a matter of record that in just over 20 years, Atul and his brothers Ajay and Tony have managed to turn South Africa into their personal spaza shop.

Usually looting is executed by despots who have the good manners to stage a military takeover before they commence the plunder. The three brothers started their African odyssey with relatively modest means, selling shoes and hammering together computer parts in a house in Bedfordview. But during the course of their safari they have created a new model for rapacious greed. The invisible coup in a business suit.

Here are the essential rules for wannabe oligarchs:

Audacity is the mother of kleptocracy

In 1960, Mobutu Sese Seko, an A-grade kleptocrat if ever there was one, staged a coup in the Democratic Republic of Congo and renamed it Zaire.

Years later he was asked on American television about the size of his fortune. Could he personally pay off his country's multibillion-dollar debt? Mobutu replied that theoretically that was possible — but how could he be sure he would ever get his money back?

The kleptocrat's business model is characterised by cunning, nerve and a large dollop of audacity. Here's just one example: you ask your local grocer to pay you in advance for pawpaws. But you have no pawpaws. You want to use the grocer's advance to buy the implements you need to cultivate the pawpaws.

When the Gupta company Tegeta Exploration and Resources wanted prepayment of R1.68-billion for coal from Eskom, it had not yet bought the machinery with which to produce the coal. It gets more bizarre. Prepayment would fund the mine's machinery. Only then would they mine the coal for which they had already been paid. Duh! Only suckers gamble with their own money.

Is it nothing but a huge coincidence that the hapless Mosebenzi Zwane's CV was sent to the three brothers a month before he was appointed mineral resources minister in 2015? The art of comedy is definitely in the timing.

The family had initially explored China for business opportunities. Somebody must have told them the Chinese penalty for corruption is death

Minister Des van Rooyen, our esteemed finance minister for four days, spent seven consecutive days at the Guptas' Saxonwold compound before he was appointed. Think about it: he spent more days in Saxonwold than he did as finance minister.

Always put your eggs in one bastard

This twist to Dorothy Parker's pun has paid off handsomely for the brothers.

The family had initially explored China for business opportunities. Somebody must have told them the Chinese penalty for corruption is death.

The three zoned in on the rainbow nation, which was ripe with optimism and promise as democracy dawned. Upon their arrival, the troika energetically courted the new ruling class to establish political cred. But as Pieter-Louis Myburgh writes inThe Republic of Gupta, they soon spotted the potential in Jacob Gedleyihlekisa Zuma. 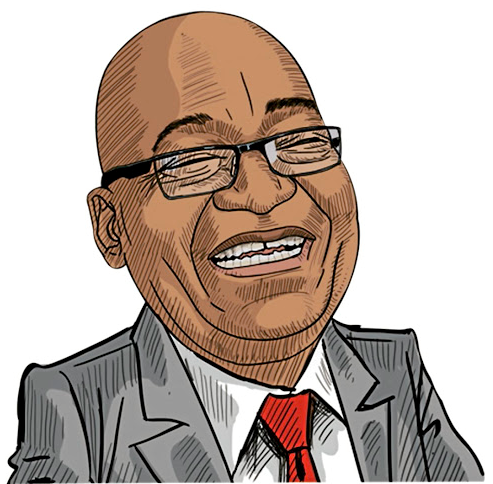 An early business associate remembers Atul first mentioning the name Jacob Zuma in 1998. "It is actually crazy how frank he was about this, but he bragged about having an ANC guy in his pocket. Atul said that when this guy eventually becomes president, their ship was going to come in big time."

Commendable foresight, given the circus rings Zuma had to jump through before he could pack his pyjamas for Mahlamba Ndlopfu.

The Guptas themselves claim to have met Zuma in the early 2000s, when he was already deputy president of the country.

Whatever the year, the ship came in all right. A mega cruise liner with all the toys patronage could buy.

Reel them in, hook, line and stinker

This modus operandi starts at the top. It involves the most vital organ in government: the president's ear. Capturing this body part ensures carte blanche to pilfer billions from the people's piggy bank.

There's another vital body part. Here's a clue: one of the most coveted positions in Henry VIII's court was that of Groom of the Stool, the courtier who "monitored and assisted" the king's bowel movements. In exchange for wiping the royal bottom, the incumbent had unrivalled access to the king. It worked in the 16th century so there's no reason to suppose it doesn't work now.

No part of government is off limits. No state-owned enterprise is out of bounds. No amount of thievery is too excessive. All ministries are fair game. Everybody has a price tag.

And above all, never miss an opportunity to snatch crumbs out of the mouths of the poor.

Adding the president's son to the mix streamlines access to No1. For both sides of this symbiotic relationship the reward is more sackfuls of the good stuff than Bill Gates could give away in a lifetime.

In a game of follow the leader, Zuma acolytes queue up to get their slice of the cake. The children of key Zuma loyalists are reeled in and the machinery of state capture is kept well greased.

Yusha, son of ANC deputy secretary-general and Zuma backer Jessie Duarte, jets off to Dubai on the Gupta account in 2014.

But the primary focus remains the president and his son, who are steadily trapped in an impenetrable web of dependence.

It becomes infantile. Tony Gupta gets involved in negotiations over Duduzane's papgeldwoes.

Does he have to wipe the first son's botty?

Just one company being caught out will be enough to dissuade others, and that's how the rot will eventually be undone, says Bruce Whitfield
Business Times
4 years ago

"All effective propaganda must be confined to a few bare essentials and these must be expressed as far as possible in stereotyped formulas."

You'd be forgiven for thinking this is the mantra of the Guptas' PR company of choice. You'd be wrong; it's Hitler's dogma spelt out in Mein Kampf.

How does a family blitzkrieged by bad publicity fight the onslaught? By appointing London-based PR heavyweights with impeccable credentials to counter the attack. Maestro spinners Bell Pottinger have an impressive pedigree. They were signed on by the Pentagon to boost the US profile in Iraq post-2003 with covert propaganda.

Knowing that attack is the best form of defence, BP dream up slogans such as "white monopoly capital" to bruise the opposition. Gupta critics are anti "black economic transformation".

Wait a bit, isn't this PR outfit itself a symbol of white monopoly greed, based in the old imperial capital? Who cares! Deceit has a prominent position in the kleptocrat's briefcase.

And there is always a never-ending supply of useful idiots to propagate alternative realities. Press notes are prepared for ANC Youth League president Collen Maine. Part of the script: "I hold no brief for the Guptas, but I'm celebrating how they have entered areas previously closed to anyone other than the pre-94 controllers of our economy."

When your posh PR company is outed and becomes the laughing stock of the country, abandon all pretence of subtlety. Do a Hitler and unleash the stormtroopers. Black First Land First's Andile Mngxitama is an enthusiastic brand ambassador for the brownshirts.

Where does it say you have to practise what you preach?

Tony Gupta is accused of calling security guards at Saxonwold "monkeys". That's not the language of warriors for black economic transformation, it's the kind of vocabulary that gets estate agents criminally charged and publicly disgraced.

Gupta e-mail correspondence at the time of that infamous Sun City wedding is littered with racial slurs. The brothers insist on white waiters for the four-day bragfest. The resort's spa is asked to hire white beauticians for the duration. (The spa politely declines.) Newspapers report Gupta security personnel ordering black waiters to wash their hands before they serve guests. They are instructed to brush their teeth. Wow, never mind estate agents. This is Eugene Terre'Blanche territory.

Party on until the last gasp

The Mobutu of legend clung to power until 1997, when rebel forces were nipping at his ankles. The presidential guard took potshots at his disappearing plane.

The only thing left behind were his diapers strewn around Gbadolite, his palatial folly in the jungle. Prostate cancer had rendered him incontinent and he died a few months later in Morocco. It seems you can bribe anybody but the Grim Reaper.

The kleptocrat knows when there's nothing left to loot; when it's finally time to scarper off into the sunset.

If the bolthole of choice is Dubai, there's plenty of time to sit in the naughty corner among the sand dunes counting greenbacks. When boredom sets in, the kleptocrat chucks tin cans at camels for a laugh.

And sleeps like a baby at night, knowing that the people left behind were fully aware of the implosion of their country. But the people did nothing. 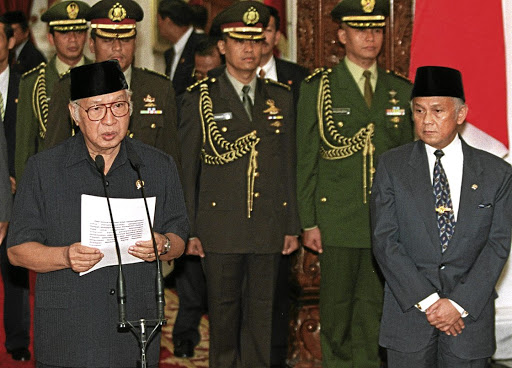 Arguably some Saudis should make the list, although they claim to own their oil 'legitimately'.