The two questions that haunt the #ZumaVote 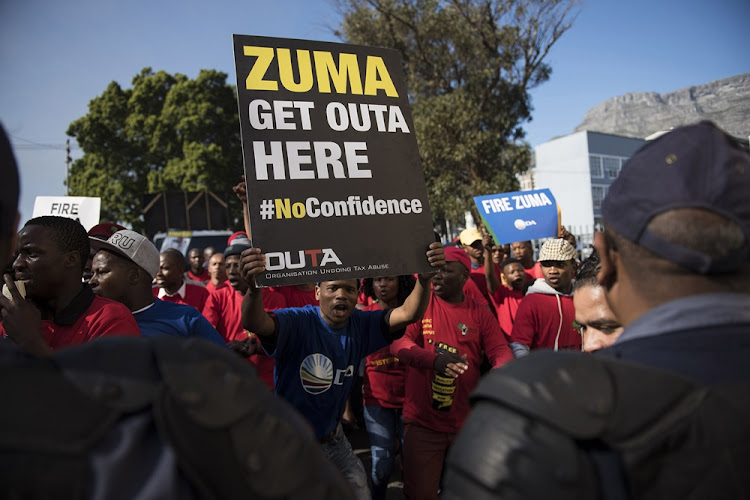 DA, EFF & other opposition party supporters march to Parliament on 8 August 2017. President Jacob Zuma faced a motion of no confidence vote for the eighth time during his right years as president.
Image: David Harrison

When the music stops and the face-saving has passed, the African National Congress has to do some serious soul searching.

A big celebration party was held outside Parliament on Tuesday evening after the motion of no confidence in President Jacob Zuma failed. But this was a mop-up operation rather than a celebration of victory.

Zuma arrived to rapturous applause and thanked his supporters for defending the ANC. He said his detractors had tried to use “technicalities in Parliament to take over from the ANC”.

Out of 384 votes in total, 177 MPs voted in favour of the motion and 198 against. Nine people abstained.

Speaking to a crowd of a few hundred mostly EFF supporters who stayed to hear the results of the vote on the motion of no confidence in President ...
Politics
4 years ago

This was not a vote against the ANC, as Zuma would like people to believe.

At least 26 ANC MPs voted in support of the motion and about eight others could have abstained.

Only the Pan Africanist Congress’s one MP had indicated during the debate that he would abstain. This means an estimated 34 ANC MPs rebelled against the party line to vote against the motion.

They could do so because of the anonymity Speaker Baleka Mbete granted them by allowing the vote by secret ballot.

So there are two questions the ANC leadership must ask.

Why did Mbete grant the secret ballot, apparently against the wishes of party leaders?

And why did more than 30 MPs defy the instructions of their party?

Police Minister Fikile Mbalula says President Jacob Zuma will only leave his position as president of the country when the African National Congress ...
Politics
4 years ago

As Zuma’s supporters in the caucus staggered outside the House, some were shocked at how close the vote was. Only 21 votes separated the “Yes” and “No” votes, and the eight abstentions narrowed the margin even further. Some were angry at their colleagues for “betraying” the ANC.

Make no mistake, the foundations of Luthuli House have been rocked and Zuma will have been shaken by the outcome of the vote.

The facade of a united party that closes ranks in times of trouble has been shattered. The message to ANC members across the country is that they no longer have to keep up the pretence that they are united behind the leadership.

There will no doubt be a witch-hunt to find the rebels.

But as the state-capture network unravels and Zuma becomes more of a dead weight in the ruling party, sentiment will continue to swing away from his faction.

The heat is on Zuma – in the ANC national executive committee and now in Parliament – and it is only a matter of time before his fiefdom collapses.

Vote to keep Zuma in power is a vote for corruption: OUTA

The Organisation Undoing Tax Abuse (OUTA) says it is disappointed that ANC MPs chose to put their party ahead of the nation and vote to keep Jacob ...
Politics
4 years ago

President Jacob Zuma did not waste time and immediately hit back at opposition MPs shortly after the motion of no confidence in his leadership was ...
Politics
4 years ago

President Jacob Zuma’s supporters are gunning for ANC MPs who voted with opposition parties in a failed bid to remove him from office.
Politics
4 years ago