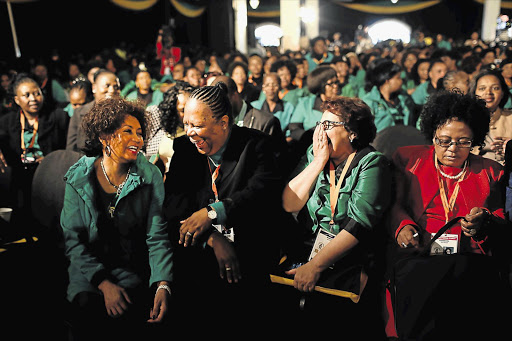 There are many absurd features to South African politics but the stance of the ANC Women’s League and the torrent of shrill statements that emerges from the organisation set a new standard in farcicality.

Over the years‚ the ANCWL has gone from bad to worse‚ from a glorified cheerleading squad to what is now a protection racket for a faction in the ANC.

Dlamini’s ANCWL makes no pretence of doing anything of the sort.

There are only two items on the ANCWL’s agenda: protecting President Jacob Zuma and those who populate his faction; and‚ secondly‚ acting as the frontline troops for Nkosazana Dlamini-Zuma’s election campaign.

The ANC's moral pulse is all but dead‚ says Khoza

ANC MP Makhosi Khoza on Monday declared the ruling party's morality all but dead after President Jacob Zuma fended off a motion of no confidence in ...
Politics
4 years ago

The ANCWL has issued a statement contesting the “misleading false narrative” in the Sunday Times relating to Deputy Minister of Higher Education Mduduzi Manana’s assault of two women. Manana is on bail of R5‚000 after a stage-managed court appearance last week‚ and continues to serve in the executive.

“The aim is to create an impression that Deputy Minister Manana is being protected by the ANCWL in particular its President. Cde Bathabile has been on the record stating that if the ANC is the leader of society‚ ANC male comrades must be in the forefront of fighting this scourge‚” the statement reads.

The statement does not contest the basis of the story – which is that Dlamini told the Sunday Times that other senior government leaders were “worse than him”.

She also said in the interview that the attack was being used as a political tool.

“I don’t want to be part of those games of saying… [should] he resign or not. Even in other parties there is sexual harassment and it’s not treated the way it’s treated in the ANC. And I refuse that this issue be made a political tool‚” Dlamini was quoted saying.

We want our money back: Ramaphosa

ANC deputy president Cyril Ramaphosa said the party can no longer afford to ignore the mounting evidence on state capture.
Politics
4 years ago

The ANCWL’s statement does not contest that Dlamini said this – in fact she repeated the sentiments at a rally in Ekurhuleni on Sunday. What the ANCWL appears to be objecting to is their depiction as being outrageous and hypocritical‚ which is clearly of Dlamini’s making‚ not the newspaper’s.

If Dlamini is aware of cases of abuse and harassment of women by senior leaders in government‚ why has her organisation not exposed or confronted the perpetrators?

Why have they not staged a sit-in at the Union Buildings to demand that Manana and others prone to violence against women be dismissed?

It is because hypocrisy is a basic tenet of the ANCWL’s public posture‚ evident in both their selective reaction to cases of women abuse and their campaign to back Dlamini-Zuma.

There is nothing in the NDZ campaign to suggest that there will be a special focus on women empowerment‚ combating violence and abuse or shattering the patriarchal networks that keep millions of women excluded from economic activity.

If anything‚ the NDZ campaign is about maintaining the status quo and keeping the Zuma-Gupta network intact.

Dlamini told the campaign rally on Sunday that supporting NDZ was a “marching order” for the women of South Africa.

Snubbing all other contenders in the presidential race‚ Dlamini said there should be no confusion about whom the league supported. Apparently the advancement of women applies to one woman only. And all other women need to do as they are told.

The “blouse” is clearly outmoded‚ washed-out and in desperate need of a new style.