'They killed Biko because he had an idea: that blacks must be proud' 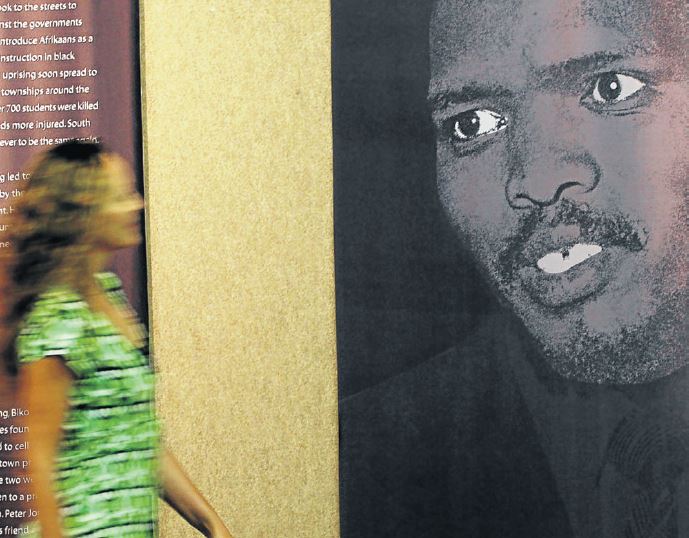 Tuesday marks the 40th anniversary of the death of Steve Biko, the Black Consciousness leader who was killed during security police interrogation.
Image: Alan Eason

On Tuesday we mark the 40th anniversary of Steve Biko's death.

Arrested on August 18 1977, he was held in a cell by bloodthirsty, murderous apartheid police. They stripped him naked, shackled his hands and feet, and interrogated him while beating him beyond recognition.

They then placed his naked body, still shackled and with extensive brain injuries, in the back of a Land Rover and drove more than 1000km from Port Elizabeth to Pretoria. He died there on September 12.

What did Biko do to deserve such a painful and humiliating death?

Biko did not have a standing army outside the borders of South Africa supported by some foreign government. He had not even called on people to take up arms against the apartheid regime.

Why, then, would you kill Biko and do so in so brutal and humiliating a manner? Was he carrying explosives? Did he bomb power stations?

No. They killed Biko because he had an idea: that blacks must be proud.

This idea had already taken tens of thousands of schoolkids into the streets to challenge the apartheid regime from June 16 1976.

They took to the streets armed only with their pride.

Which social discourses would Biko immerse himself in today?

On Tuesday it will be 40 years since Steve Biko died, naked and alone, after being tortured by apartheid security policemen. His son pays tribute to ...
Opinion & Analysis
4 years ago

The response of the mighty apartheid regime was to turn its guns on these unarmed, uniformed school kids, many of whom were minors.

Biko met his death that way because they feared his mind. They wanted to prove to him, and perhaps to themselves, too, that his ideas did not have power.

When the oppressed own their minds, it does not matter what kind of terror you impose on them, oppressing them is possible no more.

This is perhaps the reason apartheid could not simply imprison Biko, place him in a cell and negotiate with him later.

They killed Biko because he had an idea: that blacks must be proud

Forty years later, the idea of black pride is still powerful and relevant.

If you thought Biko was dead, look around: he is not in the grave. He continues to impress on our own generations the need to seek a proud life for black people. When the EFF demanded that the statue of Louis Botha outside parliament fall, it was a matter of black pride.

When University of Cape Town students demanded that Rhodes must fall, it was a matter of black pride.

When University of Pretoria and University of the Free State students demanded the fall of Afrikaans, it was a matter of black pride.

When all students demanded free decolonised education in the #FeesMustFall movement, it was a matter of black pride.

The sociocultural damage of anti-black racism is not so much on the actual bodies of black people, but their view of themselves.

The most important chains, Biko told us, were not those that restricted the physical body, such as pass laws. What mattered was the psychological power apartheid held over our people.

Biko was once asked what he meant by his vision of an egalitarian society.

"The whites have locked up within a small minority of themselves the greater proportion of the country's wealth. If we have a mere change of face of those in governing positions what is likely to happen is that black people will continue to be poor, and you will see a few blacks filtering through into the so-called bourgeoisie. Our society will be run almost as of yesterday."

Thus, 1994 merely became a change of faces - a change of pigmentation. As a result, "our society [is] run almost as of yesterday".

Now we realise it is not about black skins ruling. Rather, it is about which black mental attitudes rule.

The economic transformation that whites prefer is one that does not disrupt their way of life.

It is a way of life rooted in three things.

First, that cheap and easily disposable black labour must be available for them. Hence there is no commitment to free, decolonised education for black people.

Second, the colonial settler consciousness dictates that those among them who are rich must keep liquid cash in banks to allow them to take off any time they want.

Hence there is no local investment into labour-absorptive industries such as factories. Even as they fight against land expropriation, once land is taken they will simply go, as in Zimbabwe.

Third, they culturally belong to Europe. This is in terms of language policy, sports policy and the arts, which is one of the reasons there is no investment in African intellectual productions such as film and music that do not use white bodies and languages.

Here you discover why there is no difference between blacks in the ANC and DA. They are similar in attitude in that they never disrupt this white way of life. Under their watch, the black population will always live on its knees.

As we pause on September 12 to remember what Biko called his "method of death", let us ponder our own "method of life". For we are indeed either alive and proud, or we are dead.

To live is, first and foremost, a matter of "self-pride".

• Malema is commander-in-chief and president of the EFF