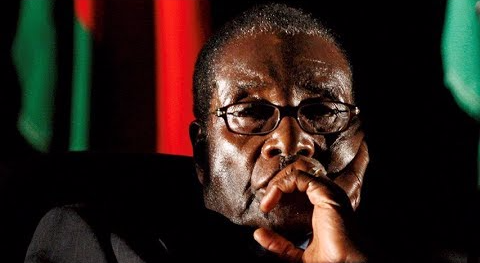 Robert Mugabe: His fall from grace Zanu-PF recalled Robert Mugabe on Sunday as the party president and gave him until midday on Monday to resign or face parliamentary impeachment on Tuesday.
Image: TimesLIVE

It would have been too easy‚ surely‚ for the indomitable Robert Mugabe to simply announce his resignation on Zimbabwean national television on Sunday night‚ for an interim president to slide into his place and then for a process of democratic reforms to miraculously ensue.

That is not how the world works.

Besides‚ this is not 2008 and Mugabe is not Thabo Mbeki.

This is 2017‚ the year that saw Donald Trump become the president of the United States and brought Nazis back in vogue.

In a time when bizarre is the new normal‚ it is more likely that Kim Jong Un and Theresa May release a love duet‚ and Xi Jinping authors a new Capitalist Manifesto.

The first sign that Mugabe would not be going softly into the good night was the inordinate delay in his speech to the nation‚ via the Zimbabwean Broadcasting Corporation.

If you are under house arrest by the army and surrendering to their demands‚ surely the concession statement would be executed with‚ well‚ military precision.

But zero hour came and went‚ while the Zimbabwean people and the world waited anxiously for the oldest living president to finally bow out.

Two hours later‚ the spindly Mugabe took his seat and began what was initially a rather erudite overview of the political situation in Zimbabwe and the country’s history.

But after losing his place and mixed up the pages‚ it became clear that this was an exercise to take the sting out of the military coup and keep up appearances.

Still‚ there was hope that Mugabe might be building to a spectacular climax‚ when he would tell the world that he had listened to the voices of the thousands of Zimbabweans who had taken to the streets on Saturday‚ asking him to leave office.

He would also say that he had taken seriously the decisions of the Zanu-PF central committee‚ demanding that he step down and expelling his wife and her cabal.

Zimbabwe’s ruling ZANU-PF will discuss the impeachment of President Robert Mugabe on Monday, its chief whip said, after a noon deadline expired for ...
News
4 years ago

Perhaps he would then say that in his country’s interests and for the sake of future generations‚ he would make way to allow a process of peaceful transition. Mugabe would of course never apologise for wrecking his country‚ so no Zimbabwean could seriously have had that expectation.

As he passed the 15-minute mark in his speech‚ Mugabe said: “The (Zanu-PF) congress is due in a few weeks from now. I will preside over its processes‚ which must not be pre-possessed by any acts calculated to undermine it or to compromise the outcomes in the eyes of the public.”

Either Mugabe had not heard Zanu-PF’s announcement a few hours earlier that he had been removed as the party leader and replaced with Emmerson Mnangagwa‚ or he decided to override it.

Mugabe ploughed on for a few more minutes‚ rounding up by saying: “We must learn to forgive and resolve contradictions‚ real or perceived‚ in a comradely Zimbabwean spirit.”

Afterwards‚ Mugabe muttered to the generals and a Catholic priest sitting on either side of him that it was either a “long” or “wrong” speech.

We will probably never know what really went on behind the scenes‚ why the generals appeared to be concealing some pages of the speech under their chairs chair and whether Mugabe had a full appreciation of what was happening in his country.

What will the Mugabes cost us‚ if they move to South Africa?

It is still unclear where Zimbabwe’s President Robert Mugabe plans to settle down if – or when – he steps down from the presidency‚ but if he decided ...
News
4 years ago

With Mugabe missing the Zanu-PF deadline to resign by midday on Monday‚ processes will unfold to impeach the president.

The only thing that is increasingly clear is that the involvement of the Southern African Development Community‚ led by South African president Jacob Zuma‚ is irrelevant.

Already it seems that the two South African envoys‚ Defence Minister Nosiviwe Mapisa-Nqakula and State Security Minister Bongani Bongo‚ returned to Pretoria on Friday with their tails between their legs.

This is turning out to be an internal party matter which‚ albeit messily‚ the Zimbabweans want to handle themselves.

In a time of bizarre happenings around the world‚ Zimbabwe could still top the charts with the combination of a rather polite coup followed by a clumsy toppling of one of the most eccentric leaders on the planet.