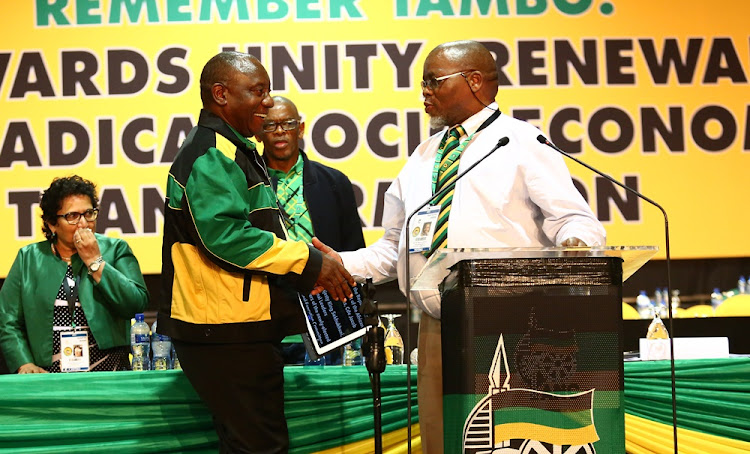 The adoption of the resolution was a psychological victory for the faction that supported Nkosazana Dlamini-Zuma's campaign, but the implementation will be in Cyril Ramaphosa and Gwede Mantashe's hands.
Image: Masi Losi

A little-known clause in the ANC constitution may prove to be Cyril Ramphosa's saving grace.

The new ANC president may have been dealt a bad hand with the people elected alongside him, but one of them could become his right-hand man and enforcer in the top six. That man is not his deputy, David Mabuza, but the new national chairman, Gwede Mantashe.

Women's League, with NDZ as its symbol, failed ordinary women

Over the years, feminist ideologies have gained momentum
Opinion & Analysis
3 years ago

It is no wonder that Mantashe looked like the cat that ate the canary at the closing session of the national conference in the early hours of Thursday morning.

Previous occupants of this position, most recently Baleka Mbete and Mosiuoa Lekota before her, never really used these powers but focused primarily on presiding over meetings.

Implementation of policies relating to the government were left to the president; those pertaining to the ANC were seen as the responsibility of the secretary-general.

Mantashe, who was until this week the don of Luthuli House as secretary-general, seems to have every intention of using the powers granted to him by the constitution.

This means that he will decide which of the conference resolutions and policies are prioritised and implemented.

The most controversial decision taken by the conference was to initiate a process to amend the constitution to allow land expropriation without compensation. Neither Ramaphosa nor Mantashe are advocates of this approach to land redistribution.

Ramaphosa acknowledged in his closing speech that the resolution to amend the constitution had been adopted, and that the ANC would accelerate its programmes of land reform and rural development as part of radical economic transformation. However, he said this needed to be done with care to avoid undermining the economy, agricultural production and food security.

The adoption of the resolution was a psychological victory for the faction that supported Nkosazana Dlamini-Zuma's campaign, but the implementation will be in Ramaphosa and Mantashe's hands.

There is concern in Ramaphosa's camp about new secretary-general Ace Magashule running the ANC when he is not trusted and has an atrocious track record in managing party structures in the Free State. Some worry that he will simply be overwhelmed by the magnitude of the task.

The camp around President Jacob Zuma is, however, buoyant in its belief that, through Magashule, it has power over party structures and the running of elective conferences in regions and provinces.

A big question mark hangs over Mabuza and the role he intends to play in the leadership. He was not present at the closing ceremony as he fell sick and had to leave the conference.

Mabuza was calculating in using the pretext of "unity" to play both the Ramaphosa and Zuma camps, and forged alliances with other provinces, particularly Gauteng, to ensure his election.

While Mabuza was previously allied to the Zuma faction, there now appears to have been a falling out with some of the president's key lieutenants, who accuse him of selling them out.

Indications are that Mabuza might align himself with Ramaphosa and even support efforts to remove Zuma from office to strengthen the ANC's chances of retaining its electoral majority in the 2019 elections.

Together with new treasurer-general Paul Mashatile, Mabuza might also act as a lobbyist to rally the deeply split new NEC.

The most immediate battle will be who out of the 80-member NEC constitutes the 20-member national working committee. The NWC oversees the ANC's functioning and ensures that provinces, regions, branches and parliamentary caucuses carry out party decisions. The NWC also determines the agenda for NEC meetings.

The new NEC will also need to appoint its subcommittee heads as well as the chairman of the national disciplinary committee and a new party spokesman.

These positions will all give shape to Team Ramaphosa and determine how he plays his cards.

Ramaphosa in the shark tank, buoyed by our hopes

There's no discounting the pressure he is under, both inside and outside Luthuli House, but this is the leader to revive a dispirited nation
Opinion & Analysis
3 years ago

ANC can no longer dodge its duty on Zuma

President Jacob Zuma is no longer in charge at the ANC. The ball is in Luthuli House's court
Opinion & Analysis
3 years ago

How Cyril can get our broken land fixed

Does Cyril Ramaphosa, intend to establish a version of the old post-apartheid Truth and Reconciliation Commission?
Opinion & Analysis
3 years ago

Urban, employable, rich: a new kind of leader for the ANC

Here are some facts about Cyril Ramaphosa that may be relevant or decisive as he negotiates the years ahead.
Opinion & Analysis
3 years ago