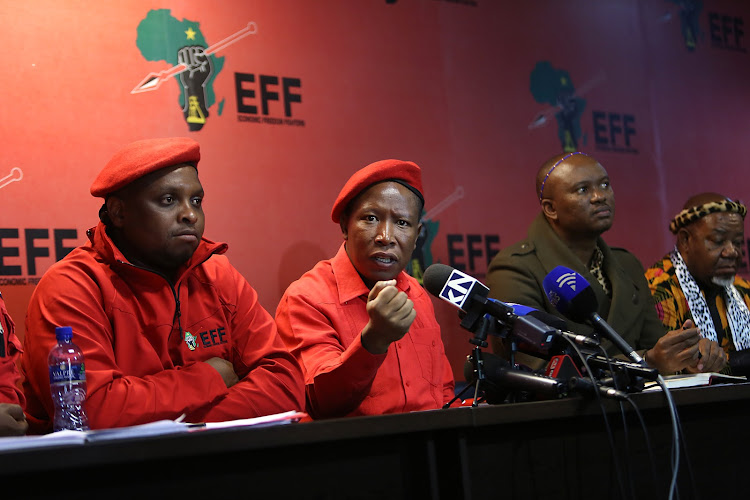 On Tuesday, EFF leader Julius Malema will address a media briefing in Johannesburg and tell you what to think. Malema will claim that it was the EFF that delivered former finance minister Nhlanhla Nene's head on a platter and therefore continues to dictate the national agenda.

He will not be wrong.

The EFF was integrally involved in the campaign to pressure Nene into offering his resignation and President Cyril Ramaphosa into accepting it.

Nene had no strategy whatsoever to manage his disclosures about meeting the Guptas at their Saxonwold home and to explain why he failed to disclose this until now.

It seems that part of the reason Nene fell on his sword was to protect his children from the EFF. This followed the circulation of vicious stories targeting the children - unrelated to the allegation that Siyabonga Nene had solicited funding from the Public Investment Corporation (PIC) while his father chaired the state-owned fund manager.

The presidency was caught off-guard by the sudden controversy engulfing the finance minister and had no control over the fallout from his testimony.

Ramaphosa was dragged along by the outrage machinery and essentially allowed the EFF to dictate what ought to happen. Even though Nene had to go, the president was unable to seize the moment to define the line on the state capture inquiry.

Considering that a significant portion of his cabinet and senior ANC leaders had relationships with the Guptas, what was the message stemming from Nene's unceremonious departure? Should other people continue to hide their dirty laundry, or should they come forward to admit their dalliances with the Guptas and face the axe?

It is possible that Ramaphosa did not pronounce the line on state capture and has not yet filled the cabinet vacancy following the death of environmental affairs minister Edna Molewa because he has not yet worked out what to do with the duds and compromised people in his cabinet.

Ramaphosa is lucky that former Reserve Bank governor Tito Mboweni yielded to the president's request to take the finance minister position. Had he stuck to his guns and declined, as the other two people Ramaphosa approached had done, the president might have continued to dither.

As with the land issue, somebody else is determining the course of action, and Ramaphosa is trying to play catch-up.

Strangely, even when the EFF has been implicated in corruption, its leaders still have the space and ability to manipulate public opinion.

While the elite looted, poor depositors were left waiting in long queues to get their cash
News
3 years ago

The EFF has delayed reacting to the explosive forensic report into VBS Mutual Bank by almost a week, allowing the outrage to die down and pressure to subside.

In truth, the EFF has been preparing the ground for the exposure of its links to massive corruption at VBS since June. It was apparent through preliminary investigations that as part of the wholesale pillaging of VBS bank, funds had been paid to the EFF and channelled in particular to its deputy president, Floyd Shivambu. There were also allegations that Shivambu acted as a facilitator of PIC deals, receiving hefty payments for his time.

The EFF went on the offensive, attacking people in the National Treasury, commentators and journalists for suggesting these allegations should be investigated and that Shivambu should subject himself to a lifestyle audit.

Malema claimed that these calls emanated from a "mob" of racists and paid "Stratcom" agents.

For his allegations to be true, a group of politicians, government officials, commentators and journalists, united in a racist agenda, would have concocted the allegations or ensured payments were made to people linked to the EFF in order to frame the party.

In the absence of rational discourse and strong leadership in society to navigate such obfuscation, it was best to await the release of the investigation report into what caused the crash of VBS.

Because of the dearth of leadership, many people will take his cue and chase after whomever he defines as the enemy

The 148-page report by advocate Terry Motau paints a frightening picture of collaboration to source funds from municipalities and state-owned companies, and laundering schemes to conceal large payments to connected individuals and companies.

The EFF acknowledged Motau's findings in a statement and said those involved in looting close to R2bn from VBS should be prosecuted and blacklisted. Apart from the EFF's national chairman Dali Mpofu's legal and biblical gymnastics to exculpate Floyd from the payment of R16.1m to his brother, Brian Shivambu, the party has yet to comment on the link to its deputy president and state whether it received payments from VBS.

Malema tweeted this week that his members should remain vigilant and focused as "the enemy is attacking". Who would that be exactly? Surely the enemy of the country and the constituency the EFF represents are the looters, not those who expose them?

At his media briefing on Tuesday, Malema will prescribe what people should think about the VBS saga.

Because of the dearth of leadership, many people will take his cue and chase after whomever he defines as the enemy. Even though the EFF's hypocrisy is exposed, Malema will continue to dictate the national agenda for as long as nobody else does.

EFF deputy president Floyd Shivambu has denied ever having any dealings with or receiving R10m from VBS bank‚ referring to attempts to link the EFF ...
Politics
3 years ago

The Economic Freedom Fighters will not suspend its deputy president‚ Floyd Shivambu‚ pending an inquiry into allegations related to the looting of ...
Politics
3 years ago

Tjo! Twitter is on fire over Floyd Shivambu, his brother and that VBS payment