The NPA itself is captured. Only an unsullied new boss will redeem it 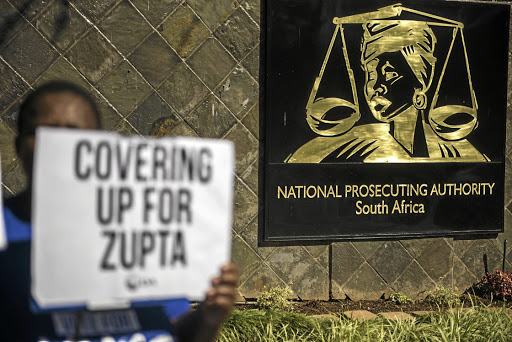 A protester pickets outside the NPA offices in Pretoria in 2017.
Image: Gallo Images/Alet Pretorius

The decision by the National Prosecuting Authority (NPA) to provisionally withdraw charges against the Gupta enablers allegedly involved in syphoning millions of rands from the Estina dairy farm project in Vrede is a mighty blow in the fight against endemic corruption.

As more jaw-dropping revelations are made before the Zondo commission of inquiry into state capture, the public is left to wonder: will the suspects ultimately pay for the destruction they've caused, or are they simply going to be left alone to enjoy their ill-gotten gains?

The Guptas, having robbed the country blind, are now laughing at us. They've made an ass of us.

The NPA and the Hawks studiously ignored all the alleged wrongdoing by the Guptas and their cronies circulating widely for some time. It was only after the election of Cyril Ramaphosa as ANC president in December last year that they were roused to action.

In January, the Hawks searched the offices of Free State premier Ace Magashule, who had just been installed as ANC secretary-general, and those of the provincial department of agriculture. It was under Mosebenzi Zwane, a former mineral resources minister, that the agriculture department is alleged to have paid R220m to the Guptas - money intended to help emerging black farmers. Some of the money, R30m, is said to have gone into paying for a lavish wedding at Sun City. There was an outcry when a private jet carrying guests to the wedding landed at the Waterkloof Air Force Base, but little did the public realise that the entire thing was being paid for by the South African taxpayer.

The Guptas, having robbed the country blind, are now laughing at us. They've made an ass of us

The raid on Magashule's offices gave the public hope that at last something was being done to curb the widespread corruption. The arrest of eight Gupta people a month later, in February, enhanced public trust that the wrongdoers wouldn't get away. But now they're off the hook, and the NPA is left with egg on its face.

It wouldn't be so bad if this was the first case to be botched. In April, a 20-vehicle convoy of officials from the South African Police Service, South African Revenue Service, Asset Forfeiture Unit and the Civil Aviation Authority descended on the Gupta compound in Saxonwold, Johannesburg, with an order to impound assets valued at more than R250m belonging to individuals implicated in theft, fraud and money laundering. It was a show of force clearly meant to impress.

But the victory was short-lived. A month later a judge ordered the release of the assets to the Guptas, saying the NPA allegations were mere speculation.

We are now left wondering whether the allegations of corruption involving eye-popping sums of money will ever be investigated, let alone successfully prosecuted. State capture is real. It affects people. Eskom is flat on its back, unable to keep the lights on, for instance.

But in fact this should not come as any surprise. The ANC didn't just loot blindly. This larceny, this robbery, was properly prepared and orchestrated. Apart from electing Jacob Zuma president, the ANC at its Polokwane conference over a decade ago also decided to kill the Scorpions, probably the best crime-fighting unit ever established in this country.

Once word went out that the Scorpions had to die, the troops, inside and outside parliament, went to work to make sure the order was met, pronto. No ANC resolution has ever been carried out with more eagerness and relish.

The death of the Scorpions opened the sluice gates as far as corruption was concerned.

The next piece of the puzzle was to muzzle the NPA, which, together with the Scorpions, had been Zuma's chief tormentors. Now Zuma was to be the predator. With Jeff Radebe as justice minister, Zuma had a trusted lieutenant.

Radebe didn't have to look too far for a suitably malleable head of the NPA. His director-general at justice, Menzi Simelane, had played a key role as an attack dog not only in the suspension of Vusi Pikoli, the incumbent, but also in the destruction of the Scorpions. He had earned his spurs, so to speak, as a reliable poodle.

Attention now turned to the two institutions that were ultimately to be responsible for Zuma's downfall: the judiciary and the media.

Zuma's ploy to ensure loyalty from those around him is to pick under-qualified or compromised individuals for critical positions. That way they feel forever indebted to him.

After the messy departure of chief justice Sandile Ngcobo, the Constitutional Court was looking for a head. Mogoeng Mogoeng was quietly minding his own business as judge president in the North West, untroubled by fame, when Zuma pounced on him to be Ngcobo's successor. Why him, ahead of so many other candidates? The general view was that Zuma was looking for a sycophant; he wanted to control the judiciary.

Attention now turned to the two institutions that were ultimately to be responsible for Zuma's downfall: the judiciary and the media

But Mogoeng, like Thuli Madonsela, was to prove Zuma, the sceptics and his critics wrong. If the Nkandla judgment marked the beginning of the unravelling of the Zuma presidency, it also proved that Mogoeng was a man of steel, and that an independent judiciary was safe in his hands.

Gwede Mantashe's jibe that the judiciary was counter-revolutionary was proof the ANC had lost not only the battle but the plot as well.

Also in Polokwane the ANC proposed a statutory media appeals tribunal with powers to control what the media report. That was a ding-dong battle throughout Zuma's first term. Happily the attempt to control the media failed.

It is these two institutions that were to ultimately drive Zuma and his benefactors/beneficiaries from the feeding trough.

The state-capture template was designed and perfected in Polokwane. It is not surprising that the NPA is failing dismally in its first attempt to unravel the conundrum. The NPA itself is captured. It's caught up in the web. Which is why the appointment of an independent and unsullied head of the organisation is of the utmost importance in unmuzzling it.

But then Radebe, state capture's loyal soldier, has been charged with finding the suitable candidate. The more things change .

The National Prosecuting Authority (NPA) is provisionally dropping its case against Gupta family members and business associates implicated in the ...
News
3 years ago

Former president Jacob Zuma will fight his last crucial court battle to stop his prosecution for alleged corruption in May 2019 – the same month ...
News
3 years ago