A US policy statement expressly declares Africa a theatre in its rivalry with China, Russia 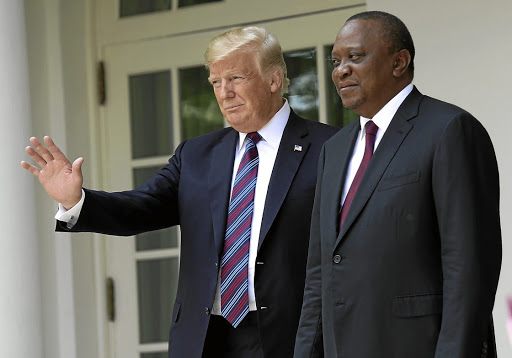 The fourth pillar, which runs throughout the text, is the US's determination to check-mate, if not altogether forcefully drive China and Russia - the US' so-called "great power competitors" - out of Africa.

Bolton accused China and Russia of every conceivable crime, from bribery to "opaque economic agreements" and "strategic use of debt" to capture Africa, and corruption.

These "predatory actions" are "sub-components of broader … strategic initiatives, including 'One Belt, One Road'" - a plan to develop a series of trade routes leading to and from China "with the ultimate goal of advancing Chinese global dominance". The US will "immediately" "begin executing countermeasures".

In contrast to Bolton's presentation, readily available literature shows that One Belt, One Road is an investment initiative involving infrastructure, education, construction, roads and railways, the motor industry, real estate and energy. It spans more than 68 countries in Asia, Europe, Oceania and Africa. No mean undertaking, it is an estimated $4-trillion (R58-trillion) to $8-trillion project that, if successful, will benefit 65% of the world's population.

When he presented the US national defence strategy in January this year, outgoing defence secretary Jim Mattis said that the US "will continue to prosecute the campaign against terrorists that we are engaged in today, but great-power competition, not terrorism, is now the primary focus of US national security".

The Bolton announcement is an integral part of the Mattis thesis. It is reminiscent of the Cold War in substance and form. How else are we to reconcile the US's claims for promoting global development, peace and security on the one hand and its posture on the One Belt, One Road and other initiatives on the other?

The answer lies in the US's anxiety about the diminishing political, economic and military preponderance it has enjoyed since the 1989 fall of the Berlin Wall. For asserting their political, economic, security, cultural and other rights to self-determine, China and Russia are seen as bad examples to what US academic Noam Chomsky has described as the "unpeople" - the wretched of the earth.

The anxiety has exercised the minds of US policymakers and "persuasive industries" - the academy and the media - for some time. Academics like Hal Brands of Johns Hopkins University's School of Advanced International Studies matter-of-factly state that "intensified great-power competition is certainly going to lead to a more dangerous and disorderly international environment".

Such "great-power competition, often of a violent variety", is seen not as a product of political decision making, but as "the norm … in the history of international affairs" to which security and other policies must logically align.

So, Bolton's rhetoric about the US's intention to "help African nations move toward self-reliance" is nothing more than mind-numbing political linguistics employed by the powerful in pursuit of their domestic and geopolitical schemes.

Brands notes: "US strategy since 1945 has been very assertively nationalist, because it has shaped a world that has been enormously beneficial to the parochial interests of the United States."

Last week, Bolton was more explicit when he said: "Every decision we make, every policy we pursue, and every dollar of aid we spend will further US priorities in [Africa]. He added: "We will make certain that all aid to [Africa] - whether for security, humanitarian, or development needs - advances … US interests."

So, consistent with US positions since at least the end of World War 2, the Trump administration's Africa strategy once again places Africa in the unenviable position of being a Cold and potentially Hot War theatre in its hegemonic battle with China and Russia. Additionally, as Bolton's speech shows, multilateralism - more so the UN's mission for the maintenance of international peace and security - is under threat in favour of something which, in time, might come to pass as international piracy.

Bolton provides useful clues about the pretexts in store to justify interventions that have little, if anything, to do with African political and developmental imperatives. "The administration," he said, "will not allow hard-earned taxpayer dollars to fund corrupt autocrats, who use the money to fill their coffers at the expense of their people or commit gross human rights abuses."

In this respect, he seemed remarkably oblivious to irony when he lamented Islamic State terrorist activities in Libya. But who are the authors of the ongoing Libyan wailing and gnashing of teeth? The same stock of phrases - "corrupt autocrats" and "gross human rights abuses" - were employed to justify the 2011 Nato-led invasion of Libya, which condemned that country to a failed state with dire social, economic, political and security consequences for itself, the neighbourhood and beyond.

Since the establishment of the Forum on China-Africa Co-operation in 2000, Africa and China have negotiated a "comprehensive programme for co-operation in economic and social development". Admittedly, trade relations remain largely in favour of China for obvious reasons of Africa's limited development capacity relative to China's. But this is true, too, of trade relations between Africa and the developed North. Except for some strange quarters, no-one has as yet suggested that Africa should sever economic ties with the North - something that would be neither possible nor desirable.

China's opaque largesse may come at too steep a price

Are we doing deals with China that may in the future cost us our sovereignty?
Opinion & Analysis
3 years ago

The substance of the Bolton announcement is that the US will intervene to fashion Africa's international relations more generally, and specifically as it concerns China and Russia, in its interests.

The contempt implicit in this stance is unlikely to serve US interests. As policy analysts like the Rand Corporation's Michael Shurkin pointed out: "During the Cold War ... American preoccupation with competition with the Soviets gravely limited policymakers' and analysts' interest in and ability to see Africans except through that lens."

Furthermore, "when forced to choose between realpolitik and concern for niceties like governance, democracy and human rights, more often than not during the Cold War, the US did the practical thing". Those in doubt about the meaning of the "practical thing" had better listen to former US president Franklin Roosevelt's 1939 remark about Nicaraguan dictator Anastasio Somoza García: "Somoza may be a son of a bitch, but he's our son of a bitch."

So the discerning may understandably retort: "So?"

The problem is not so much that the Trump administration is acting consistently with traditional US Africa policy, but the deafening silence with which the Bolton announcement, which holds far-reaching consequences for Africa and the world, has been greeted on the continent.

• Ratshitanga is the spokesperson for the minister of justice. He writes in his personal capacity

Why did Trump pick on SA? Because we got in the way between him and his nemesis, Obama

Donald Trump, mired in scandals that could upend his presidency and increasingly running out of friends abroad, this week trained his guns on SA - a ...
Opinion & Analysis
3 years ago

His tweet about land issues displayed his usual ignorance, but might have had an ulterior motive
Opinion & Analysis
3 years ago

At home and abroad, the omens are increasingly grim