Ground-breaking Zimbabwean author Tsitsi Dangarembga has written of colonial oppression, and now has taken to the streets to protest about corruption, writes Sarah Hudleston 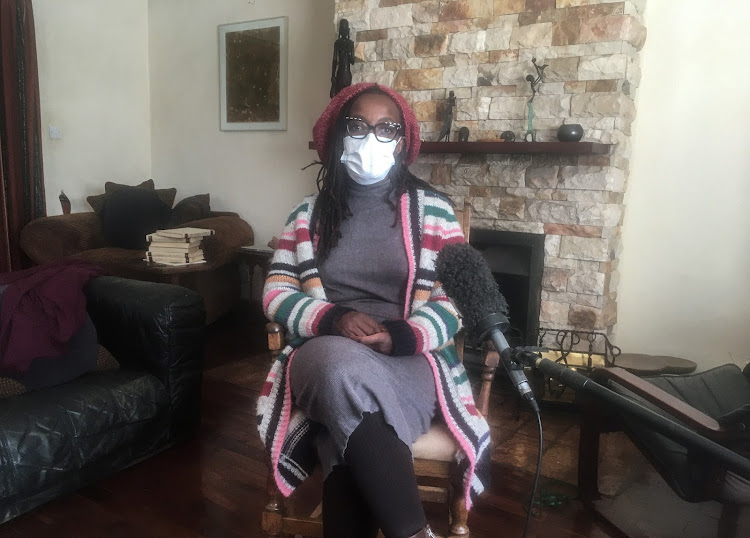 In the run-up to the July 31 anti-corruption protests in Zimbabwe, I became better acquainted with novelist, playwright, filmmaker and human rights activist Tsitsi Dangarembga. Her appeal for people to stand together in peaceful protest against the corruption and brutality of President Emerson Mnangagwa’s regime resonated, and we discussed the merits of peaceful silent protest as the most effective way to exercise one’s rights.

Born in what was then a colony called Southern Rhodesia, Dangarembga grew up in a country idyllic on the surface but in the grip of a bloody bush war and deeply divided along racial lines. She conveys the essence of these divides in her books, the latest of which has been long-listed for this year’s Man Booker Prize, the world’s most coveted literary award.

Dangarembga had been conducting a solo protest for weeks before the July event. Wearing a protective mask and carrying a placard, she strode along the highways of Harare calling for an end to corruption and for the release of Hopewell Chin’ono, a journalist, and Jacob Ngarivhume, president of Transform Zimbabwe. Both are in Harare’s Chikirube prison and are still being denied bail as well as access to protective gear against Covid-19.

Zimbabwean investigative journalist Hopewell Chin'ono remains behind bars, three weeks after he was arrested at his home.
News
1 year ago

By lunchtime on July 31, Dangarembga and her friend and fellow protestor Julie Barnes had been arrested by Zimbabwean police. Like Chin’ono and Ngarivhume, they were charged with incitement to participate in public violence and for breaching anti-coronavirus regulations. They were released on bail with a trial expected to take place in September.

Dangarembga had been informed mere weeks before her arrest of her Booker prize nomination for the third instalment in her acclaimed trilogy.

Her debut novel, Nervous Conditions, written when she was just 25, was the first novel written in English by a black Zimbabwean woman. It won the 1989 Commonwealth Writers’ Prize (Africa Region) and in 2018 was named by the BBC as one of the top 100 books that shaped the world.

This was followed in 2006 by The Book of Not, which among other issues dealt with the bush war in Zimbabwe. The third in the series, This Mournable Body, continues the strong feminist theme that pervades all three books. It picks up the tale of the lead character, whom we first met as a child and who now has a university degree but is struggling to succeed in a fractured society.

When I was in a holding cell at the police station after our arrest, I met two young men that had been tortured within an inch of their lives

Dangarembga invokes some of her own experiences in her fiction. Her mother, Susan Ngonyama Dangarembga, who died in 2017, received the highest results in the country when she wrote her Cambridge O-level exams in 1950. In his eulogy, kinsman Arthur Mutambara related how Sir Godfrey Huggins, then prime minister of the colony, said when he heard the news that “Ngonyama’s results mean blacks and whites are intellectually equal. However, socially the whites are still superior.”

Ngonyama became the first black woman in Southern Rhodesia to obtain a university degree, a Bachelor of Arts in English and Latin from Fort Hare University, where Tsitsi’s father Amon Dangarembga also studied.

Born in Mutoko in February 1959, Dangarembga moved with her brother and parents to the UK when she was two. English became her first language and she had to relearn Shona when they returned home in 1965. This experience is reflected in her books through characters who suffer the loss of language and culture.

“Like all African families, you get some members that are more successful than others yet lose their language and culture while others fight to cling on to their culture,” Dangarembga said when we spoke earlier this month. “The financially more successful family members end up carrying others, often educating their children. It’s the ‘black tax’ scenario.”

Like her fictional protagonist, Dangarembga attended a Catholic boarding school, Marymount, in Mutare, where it was common to hear the sound of mortars from across the Mozambique border. She experienced intense isolation there. For the last two years of her schooling, she transferred to Arundel, a secular Anglican school in Harare, which was “less racist”, she said.

She was admitted to Cambridge University in the UK to study medicine, but felt so homesick and alienated that she returned to Zimbabwe just before independence in 1980. She enrolled at the University of Zimbabwe to study psychology while supporting herself by working as a copywriter at a marketing agency. This inspired her to try her hand at writing plays, which were first produced by fellow students at UZ and then picked up by other theatre producers. In 1985 she published her first short story, The Letter, and in 1988, after at least four rejections by Zimbabwean publishers, Nervous Conditions was published by the Women’s Press.

Her creative interests ranged well beyond the writing of books, however. After her first novel came out, Dangarembga enrolled at the German Film and Television Academy through Humboldt University, Berlin. Here she met her husband, Olaf Koschke, a film editor with whom she has three children. To date she has written, directed or in other ways been involved in 21 films, including the internationally lauded Neria, featuring the music of the late Oliver Mtukudzi.

Time for loud diplomacy on Zimbabwe

SA has been polite for too long. For over two decades, we have watched in disbelief the destruction of our neighbouring country.
Opinion & Analysis
1 year ago

“This is why there have been such big gaps between my books,” she said. “I have been very busy. And I am a really slow writer. I rewrite at least six drafts to try and hone the writing to the point where I am happy with it.”

Even as a relatively successful writer, life is precarious financially. “I have earned only $280 in royalties in the last six months for This Mournable Body. It takes me such a long time to write and it is very dispiriting to find that people have free access to my work online.”

There has been intermittent support from foundations for the arts and she has managed to put her three sons through school but mostly, she said: “It has been a case of scrounging and trying to manage.”

She is also a tireless advocate for the work of others, particularly in her role as director of the Institute of Creative Arts for Progress in Africa Trust. “At the moment the office has some support from Osisa [Open Society Initiative for Southern Africa], for which we are grateful, but it is not sufficient to build something up on,” she said.

So in the end it was extremely impactful because it showed that peaceful protest is possible, and the people’s voice has been heard.

“The focus is on developing stories about women who are being raped or who have HIV. The current dispensation prevents people from speaking out freely and expressing themselves on these issues. Zimbabwe is a bit of a disaster and I don’t think anyone has helped it not to be.”

She fears for what is happening in her country. “When I was in a holding cell at the police station after our arrest, I met two young men that had been tortured within an inch of their lives. The one had been so badly beaten that his kidneys had been damaged and he needed urgent medical treatment.

“I am also desperately worried about Hopewell and Jacob, whose bail applications keep getting turned down. They will not let Hopewell wear goggles to protect his eyes from Covid-19 infection. His own goggles were taken away because they thought he had a hidden camera in them.”

There have been subsequent reports that the two imprisoned men have had their warm clothing taken away by prison authorities, who also will not allow their families to deliver food despite Chin’ono having a medical condition that requires a special diet.

Dangarembga has mixed feelings about the impact of the #31July protest.

“From the point of view that the mass demonstration was prevented by mass militarisation and excessive use of force on the part of the military and police, it was not so impactful. But thanks to social media we learnt of brave individuals in far-flung corners of Zimbabwe protesting, sometimes alone, their banners decrying corruption and brutality in this country.

“So in the end it was extremely impactful because it showed that peaceful protest is possible, and the people’s voice has been heard.”

She has to report regularly to the police as part of her bail conditions but is trying to concentrate on writing her new book. It will be a complete departure from her previous works, she said, revealing only that it is aimed at the young adult market.

This multi-talented 61-year-old has the fire and vigour of a much younger woman, and no doubt will become as much of an inspiration to the next generation as she has been to those who came before. Whether through words on the page or armed with a placard on the streets, she will not be silenced.

Zimbabwe President Emmerson Mnangagwa says he is not bothered one bit by social media onslaughts.
News
1 year ago

Zimbabwe says it is not on the agenda of the four-day SADC summit, which starts on Friday, because there is no crisis in the country.
News
1 year ago