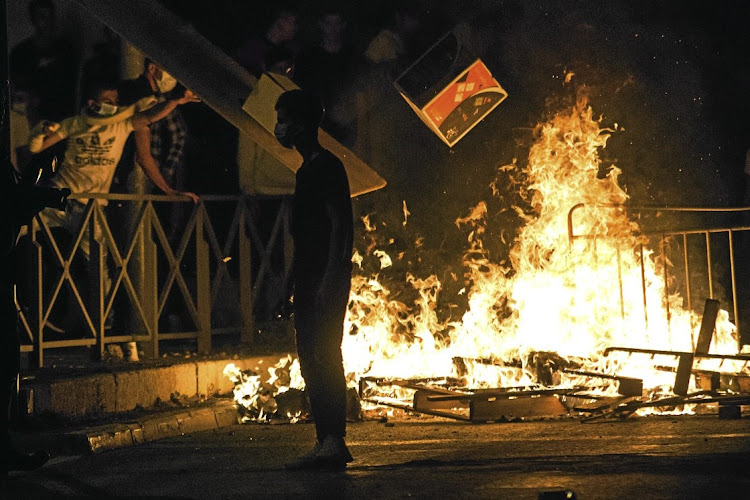 The conflict in Israel has nothing to do with the Al-Aqsa Mosque, says the writer. The status quo at the mosque — in the custody of a Muslim trust — has remained unchanged for decades. Here Palestinians set up a barricade during clashes with Israeli police during the holy month of Ramadan.
Image: Amir Levy/Getty Images

Mr President, allow me the opportunity of responding to your public letter regarding the Israeli-Palestinian conflict. We have debated these issues in private on many occasions and I’ve appreciated our frank exchanges. I do so, respectfully, this time in public, so that our fellow South Africans can benefit from our conversation around these issues that grip the world.

Mr President, you have dedicated your life to achieving peace, and sacrificed much for this noble cause.

We all long for peace. We all pray for peace. But we must start with the facts. The Talmud teaches that one of God’s names is Shalom — Peace — and that His “royal signet” is Truth. These two values are intimately connected. There can be no peace without truth. And so, it is from a love for peace that I write this letter about the truths of the situation.

The truth is that this most recent war has nothing to do with the pending evictions from Sheikh Jarrah, which involve a property dispute between title owners and occupants of the homes. The ruling was made by a court of law — part of an independent judiciary on which Jews and Arabs serve — and bears no similarity to the evil forced removals of apartheid. There is no Group Areas Act in Israel, no legally designated areas for specific religious groups, no forced removals based on ethnicity or race.

Though instinct could plunge me straight into the cauldron of violence, bloodshed and destruction which has wreaked havoc in Palestine over the past ...
Opinion & Analysis
1 year ago

The truth is that there is no apartheid in Israel. All its citizens are equal before the law, have the right to vote, and serve at every level of government. At this very moment it is the Arab-led parties in parliament that hold the balance of power and will determine who will form the next government. Israel is a vibrant, liberal democracy with an aggressively free press, complete freedom of speech and association, and the full equality of all its citizens enshrined in law, and there is no segregation of public facilities.

Of course, as in any free society there are human flaws and prejudices — as there are here in SA — but, as we know from bitter experience, that is not the same as legally enforced discrimination.

The truth is that this conflict also has nothing to do with the situation at the Al-Aqsa Mosque. Israel is the only country in the Middle East where Christians, Jews and Muslims can safely practise their faiths, and have free access to all the holy sites.

The status quo at Al-Aqsa has remained unchanged in decades. And though the mosque sits atop the Temple Mount, Judaism’s holiest site, the Israeli government has given custody over the site to a Muslim trust who manage it as a Waqf (an inalienable religious endowment), and bans prayer by Jewish visitors to the site.

The truth is that the ongoing conflict has nothing to do with “the illegal occupation of Palestinian land and the denial of the Palestinian people’s right to self-determination”, as you put it in your letter.

Mr President, if this were so, this conflict would have been resolved decades ago.

There have been many opportunities to establish a Palestinian state — beginning with the UN resolution in 1947 partitioning the area into a Jewish and Arab state. Then there were the years from 1948-1967 when the territories of the West Bank and Gaza were under the control of Jordan and Egypt respectively.

For almost two decades, the world, the UN, and the Palestinian leadership had the opportunity to establish a Palestinian state when the territories were under Arab control — but they didn’t. There was no occupation then; and yet no Palestinian state, and no real demand for one.

We must understand why all the efforts to establish a Palestinian state failed. If we don’t truthfully confront that question there will never be peace

Since then, over the past two decades alone, in addition to the unilateral disengagement from Gaza, there were two formal offers made by successive Israeli prime ministers to establish a Palestinian state with Jerusalem as its capital, one including 91% of the West Bank, the other 93% of the West Bank. Both were rejected.

We must understand why all the efforts to establish a Palestinian state failed. If we don’t truthfully confront that question there will never be peace.

Professor Bernard Lewis, the widely respected Middle East historian, asks: “What is this conflict about? Is it about the size of Israel or about its existence?” He suggests that if the conflict is about the size or borders of Israel then it can be resolved peacefully. But “if the issue is the existence of Israel, then clearly it is insoluble by negotiation. There is no compromise between existing and not existing.”

Hamas is open about the fact that it is Israel’s very existence that cannot be tolerated, as it acknowledges explicitly in its charter: “Israel will exist and will continue to exist until Islam will obliterate it; just as it obliterated others before it … there is no solution for the Palestinian question except through Jihad.”

Their unambiguous goal is the eradication of the Jewish state, as they make clear by firing thousands of rockets into densely populated civilian areas, from within their own densely populated areas, to maximise casualties on both sides — a double war crime.

Unsurprisingly, it is designated a terrorist organisation by most democracies in the world.

Mr President, the values of our South African constitution, which you lovingly drafted on behalf of the people of our country, stand in stark contrast to the genocidal aims of Hamas. There is almost no clause of our Bill of Rights which is not emphatically repudiated by the Hamas charter. As a proud and free democracy, we should align with fellow democracies, like Israel, India, Brazil, Nigeria and the US — all imperfect but all free. And we should not align with dictatorships like Hamas, or for that matter Russia, China, Iran or Venezuela.

Finally, Mr President, I implore you to respect the integrity and faith of millions of South Africans who abhor apartheid and the suffering and evil it wrought and yet love and support Israel. Consider the position of so many of our fellow compatriots who know that since the times of Abraham, Isaac and Jacob there has been an unbroken Jewish presence in Israel for almost 4,000 years, including the great commonwealths of King David and King Solomon, and that the Jewish people are indigenous inhabitants of the land and not colonialists.

Hear the voices of people across the length and breadth of our country who hold dear the sacred pledge, “If I forget thee, O Jerusalem.” (Psalms 137:5).

May God bless you, Mr President, and all of us, that we may see the fulfilment of His ancient promise: “For teaching will come forth from Zion, and the word of the Lord from Jerusalem … and they shall beat their swords into ploughshares; nation will not lift up sword against nation and neither will they learn war anymore.” (Isaiah 2:4-5).

• Dr Goldstein, who has a PhD in human rights and constitutional law, is chief rabbi of SA

A brief history of the violence in Gaza

Gaza, one of the most densely populated places on the planet, has been sealed off from the outside world since the early 1990s. The territory is ...
Opinion & Analysis
1 year ago