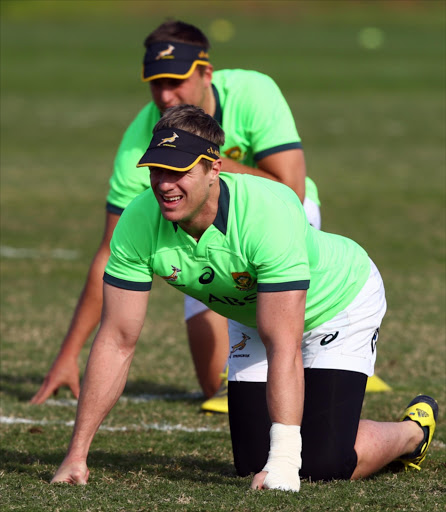 South Africa captain Jean de Villiers is relishing a return to test match rugby in what seems certain to be his final Springbok game on home soil against Argentina in the Rugby Championship at Kings Park on Saturday.

Yet the 34-year-old, who is set to lead South Africa at the World Cup in England, believes he still has to prove he deserves his place in the squad amid tough competition.

De Villiers said on Friday it was "highly unlikely" he would play international rugby in 2016, meaning next month's global showpiece could bring to a close a Springbok career he had feared was already over.

De Villiers required a full knee reconstruction after an injury picked up against Wales in November last year but says the pain, frustration and anxiety caused by that blow is now well and truly behind him.

"There were times when I didn't think I would get here again," De Villiers told reporters.

"The reality is it will be my last test in South Africa. I can't see myself playing international rugby next year."

The centre's leadership on and off the pitch is highly-valued by coach Heyneke Meyer, but with the emergence of exciting young backline talents in the squad, De Villiers conceded: "I need to perform good enough to make the 31-man (World Cup) squad.

"The emotion is out of it now, I have made my comeback and I'm not injured anymore. It is also about me proving to myself that I am good enough."

De Villiers believes the competition among the backs will benefit the team.

"Competition within a squad is the best thing you can have if it is approached in the right way and if the attitude of the guys involved are good.

"Certainly in that regard it has been fantastic in this team."

The form of inside centre Damian de Allende in 2015 means De Villiers will make his return in the number 13 jersey. He admits it is not his favoured position, but is looking forward to the challenge, with his return seeing exciting youngster Jesse Kriel move to the wing.

"I have always said I prefer 12 but I don't mind 13. We have got such an exciting backline and we can interchange so much. Guys can fill in different positions and that's quite exciting."