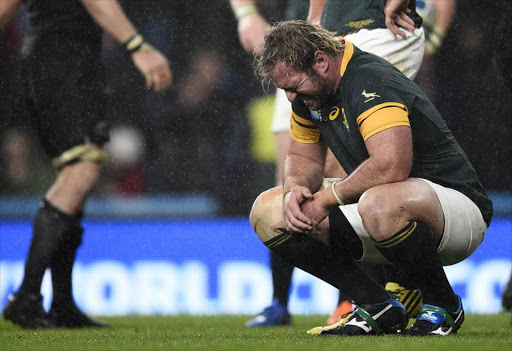 New Zealand supporters at Twickenham leapt up in joy and relief as the All Blacks hung on for tight victory over South Africa in their World Cup semi-final.

The atmosphere was electric as the game entered a deafening last 10 minutes as New Zealand held on to their 20-18 lead, both sets of fans feeling the tension and roaring their teams on.

On the way to the ground, supporters of both sides wore half-and-half match scarves, with South Africans donning Springbok horns and New Zealanders painting their faces black and white.

A South African braai stall set up on the front drive of a semi-detached house did a roaring trade, serving up boerewors beef sausages and sending clouds of smoke into the London air.

Planes heading into nearby London Heathrow Airport flew low over the ground and one incoming set of passengers got quite a show as the teams ran out, with fireworks shooting out of the stadium roof.

After the singing of "God Defend New Zealand" and the South African national anthem, with green-clad supporters thumping their chests, the Springboks' Handre Pollard got the match under way.

In the first half, New Zealanders were in better voice among the 80,090 in the crowd, with chants of "All Blacks! All Blacks" ringing round the stadium.

And they gave South Africa left-wing Habana a booing when he lost patience with Dan Carter's lengthy kicking routine and charged out to meet the fly-half when kicking to convert Jerome Kaino's sixth-minute try.

Springboks fans roared into life in the 34th minute when they thought J. P. Pietersen was clean through to run the length of the pitch to score a try, but play was called back for an infringement.

And five minutes later they were cheering again when Kaino was sin-binned.

"I'm very impressed, very happy with the way it's gone," said Steve from Johannesburg, as he held two pints of lager.

"It's a great game. The Boks are dominating the All Blacks. We're 40 more minutes to the final. But I think the All Blacks have a few tricks up their sleeves. Surely they're not going to come with a game plan like that."

All Blacks fan John from Christchurch, said: "I'm very nervous and I'm hoping that Sonny Bill Williams comes on and is the game breaker.

"We're five points behind and if it was any other team, you'd think the Boks have got this done. They are playing a very tight, sensible game and if they keep playing like that, they will shut it down."

After a Carter drop goal, New Zealand fans screamed for a try as the All Blacks inched closer to the South African line and were greatly relieved when replacement Beauden Barrett touched down, putting New Zealand ahead.

It was only then that South Africans filled the stands with chants of "Bokke! Bokke!" as Pollard and his replacement Patrick Lambie's kicking kept them in the contest.

In a thrilling, tight last 10 minutes, New Zealand retained possession and ground out a victory, sending Springboks fans out into the rainy night with gloomy expressions to match the London weather.