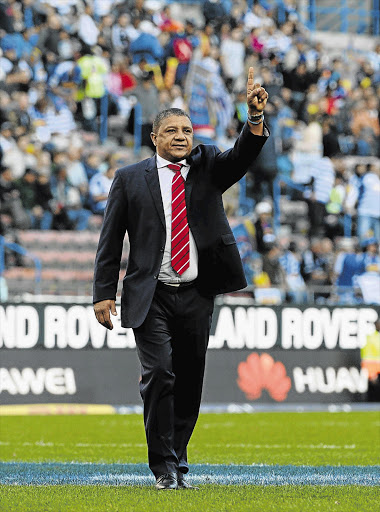 After months of wrangling at the South African Rugby Union (Saru), the issue of the Bok coach will finally come to a head at its next general council gathering, scheduled for that date.

Normally, at this time of year, the Bok coach would have attended several Six Nations matches to have a close look at June's opposition (in this case Ireland) and also held several one-on-one conversations and interactions with players he deems vital to his vision.

Formal meetings with players about their shortcomings and what the national coach is looking for them to improve or persist with would be the norm. None of that is currently happening and none will for another three weeks at least.

Saru's employees have been distracted over the past two months due to constant media scrutiny of chief executive Jurie Roux over alleged financial irregularities when he was chairman of the Maties Rugby Club from 2002-2010. He is awaiting a court date to defend a R37-million civil action against him.

Furthermore, a looming leadership battle between the 14 union presidents and the executive council has also been unsettling.

For most big decisions these bodies and individuals have to work in sync to prepare the groundwork before resolutions can be ratified. The distractions have at times paralysed the organisation and the net result is that the most important rugby decision of the year - the identity of a new Bok coach - has been relegated for less urgent matters.

Some of the 14 union presidents don't favour Coetzee's conservative playing style. But instead of thrashing out those differences and debating Coetzee's merits, the presidents have been engaged on personal leadership battles with Saru's exco.

But behind the scenes the Sunday Times has learnt that through Bok team manager Ian Schwartz, logistics manager Charles Wessels and rugby department general manager Rassie Erasmus, a schedule has been drawn up.

Springbok training camps have been set for late April while player monitoring is happening through the rugby department and Mobi Unit.

Coetzee is understood to be the only suitable candidate for a post that needs to fulfil three central requirements.

The new coach must have a good track record in the upper reaches of the game, which Coetzee has considering he took the Stormers to the play-offs four times in six seasons in charge. He was also Bok assistant coach when they won the 2007 World Cup in France.

The next coach has to have a strong transformation track record. That rules out foreign-based coaches and every Super Rugby coach over the past five years barring Coetzee. He regularly fielded seven or more black players in his Stormers squads between 2010-2015.

Thirdly, he must have the gravitas and credibility to present the Boks in a positive light.

"If you ask around people will say Allister hasn't had any success as a coach," Venter said. "But he has been very successful because his teams were always in the mix.

"Only four teams will make the semifinals, which is in the top 20%-25%. That's a success. But to win titles, you need a lot of luck.

"I've spoken to leading coaches in various sports around the world, and they all say that their job is to get the team to the final four [or the play-offs] because that gives you a chance.

"If you're bottom of the log, then you're not successful."