SuperSport United came from behind to beat Mpumalanga Black Aces 2-1 at the Lucas Moripe Stadium in Atteridgeville‚ Pretoria‚ and reach the Nedbank Cup semis on Friday night. 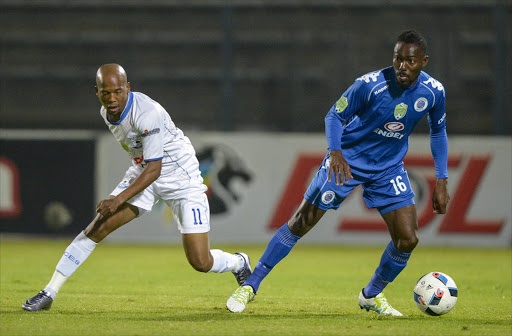 Aces controlled the first half‚ but that all changed in the second half after Jeremy Brockie was introduced for the home side.

The visitors started on a bright note with Judas Moseamedi putting them in front with a header in the fifth minute from a corner by Aubrey Ngoma.

A minute earlier‚ Ngoma had initiated an attack and made a terrific run and crossed for Sibusiso Masina‚ whose attempt was saved for a corner by Ronwen Williams.

From the resultant set piece by Ngoma‚ Moseamedi rose highest to head home to put AmaZayoni in the lead.

Dove Wome then wasted a glorious opportunity for the home side in the 10th minute when‚ in a one-on-one situation‚ he failed to beat Shu-Aib Walters.

In the 21st minute‚ Clayton Daniels directed his header wide from a corner by Thuso Phala.

Two minutes later‚ Aces defender Lehlohonolo Nonyane pushed forward and put in a dangerous across the goalmouth‚ but Moseamedi failed to connect with the ball.

Things appeared to go from bad to worse for Matsatsantsa when Sibusiso Khumalo was forced off the field with injury with 33 minutes on the clock and was replaced by Thato Mokeke.

Phala delivered a good ball for Bradley Grobler in the 34th minute‚ but the latter's header was well saved by Walters.

Aces were pretty much in a commanding position at the break or so they thought. For the second half‚ SuperSport United coach Stuart Baxter sent in Brockie in Kingston Nkhatha's place.

The New Zealand-born striker‚ who now has 16 goals in all competitions‚ didn't disappoint.

Aces could have gone two up early in the second stanza. Thabo Nodada played in a good ball for Mbesuma‚ whose attempt was saved by Ronwen Williams in the 52nd minute.

The Mpumalanga side was left to rue their missed chances when Brockie levelled matters in the 68th minute with a header after a pass from Wome.

And right at the death‚ Phala stepped up to score the winner after his shot deflected off teammate Grobler and into the net.