Where are the goals: Ertugral laments poor firepower among PSL strikers 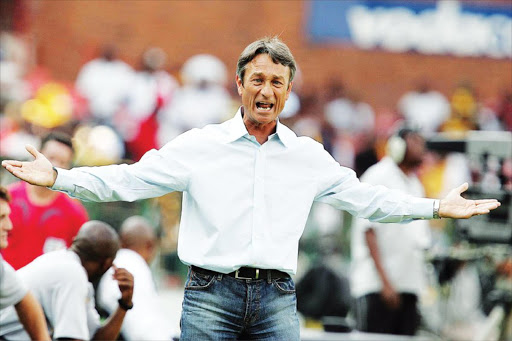 Muhsin Ertugral says Collins Mbesuma should have scored twice as many goals as he did this season.
Image: GALLO IMAGES

Collins Mbesuma will ascend the podium to accept the Premier Soccer League top goalscorer award for his 14 goals at the end of season award function on Monday night.

It will be Mbesuma's second time collecting the Lesley Manyathela accolade, coming 11 years after he bagged his first with 25 goals for Kaizer Chiefs under the stewardship of coach Ted Dumitru, who died this week.

The Zambian international's tally is 11 strikes shy of the 2005 goal haul, but it gives Mpumalanga Black Aces something to cheer as the goals helped them finish fourth, their highest in the PSL era.

What does it say about the quality, or lack thereof, of strikers in the country's elite league that they consistently fail to break through the barrier of 20 goals from 30 matches? Mbesuma's coach Muhsin Ertugral laments the lack of firepower and says his striker should have scored double the figure.

"In a very organised league like the PSL, we need to raise the bar for much more higher up. As his coach, I am happy for Mbesuma. But seriously, what is 14 goals? Honestly speaking, he should have scored double that number.

"I think we spend too much time developing playing skills and not finishing skills. The players right across our league have great ability, no doubt about that. However, more often than not you see them in good scoring positions and they take one, two, three touches on the ball before taking a shot at goal," says Ertugral.

"It is rare that we see a player finish a move with one touch and it's a goal. We as a team we need to play higher up to use his finishing to our benefit." By his own admission, Mbesuma, who is in national camp preparing for an Afcon 2017 qualifier against Guinea-Bissau, is so displeased with his return he's described it as pathetic.

"When I started this season, my focus was to break my record. That was my goal, even if I win this, I'm not going to celebrate. Fourteen goals after how many games, you need to score 20 or more, then we would be talking."

"I think he would have scored five or six more goals had Lebo not been injured.

"They have a great understanding and Lebo did a lot of work that allowed Collins to concentrate on converting," says Ertugral.

There were other contributing factors to the low goal ratio.

"For an example, in the 0-0 draw we played against SuperSport United, we put in 33 crosses. Now that's a very high margin but we only had four connections.

"At times you find the decision on the crosses are not right. In the same game we had 54 entries into the last third but none resulted in a goal. These are the things we have to work on in order to improve."

Goal of the Season: Ben Motshwari vs Chippa, Mpho Makola vs Chippa, Thabo Rakhale vs Aces.