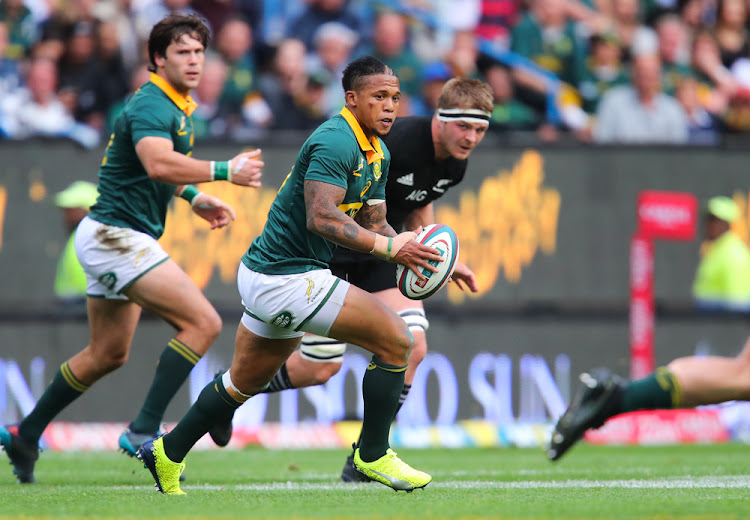 Elton Jantjies during the Castle Lager Rugby Championship Test between the Springboks and the All Blacks in October 2017.
Image: Roger Sedres / Shutterstock.com

We’re getting close to the fourth weekend of the 2018 Investec Rugby Championship, and the Boks will have to work hard to redeem themselves when they take on the All Blacks on Saturday in Wellington.

After last weekend’s devastating defeat in the gruelling game against the Wallabies, all eyes will be on the Springboks when they run out onto the field at 9.35am, South African time, on September 15.

Won’t be home to watch the game live at that time? If you’re a DStv Premium subscriber, you’ve got the edge. With the DStv Now app on your phone or tablet, you’ll be able to live-stream the game, at no extra charge, no matter where you are.

And it’s not only this crucial game that will be on the DStv Now app. All six of the remaining games in the series will be streaming on the app, including the Boks facing the Wallabies in Port Elizabeth on September 29 and the All Blacks at Loftus on October 6.

How to watch the 2018 Investec Rugby Championship with DStv Now

Why watch the 2018 Investec Rugby Championship on DStv Now?

Let’s face it, you won’t be able to watch every game live in your living room, as some matches are on at ridiculous times when they’re being played in Argentina, Australia or New Zealand.

With SuperSport on DStv Now, you can stream the Rugby Championship wherever you are. You don’t even need to be at home – you can watch the games on your laptop through the DStv Now website or on your phone using the app.

What is DStv Now?

DStv Now is basically an online version of DStv – it’s a way of watching sports and shows on your smartphone, tablet, smart TV or laptop. Live-stream some of the best DStv channels or use Catch Up to stream or download the latest episodes of your favourite shows and binge-watch entire seasons. Your access to channels on DStv Now depends on your DStv subscription – not all channels are available to all subscribers.

DStv Now recently launched four new lean-back apps. These apps make it possible to turn any TV in the house into an easy-to-use DStv hub without the need for a decoder. The new apps are available for the following devices:

This article was paid for by DStv Now.