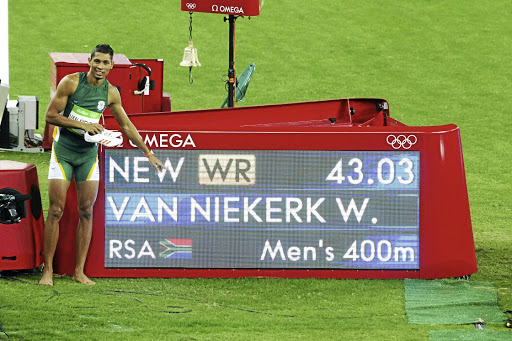 Wayde van Niekerk rocked the world with his 43.03sec 400m world record at the Rio Olympics four years ago. Now, coming back from a knee injury in 2017, his chances of qualifying for Tokyo are drying up.
Image: Getty Images

SA's two most successful Olympic coaches say the Tokyo Games should be postponed because of the coronavirus crisis, citing difficult training conditions and heavily reduced chances to qualify.

Head swimming coach Graham Hill and national rowing squad mentor Roger Barrow, who between them masterminded six of the country's 16 medals at the last two Games, say there is no way that competitors from around the globe can compete fairly at the showpiece, scheduled to run from July 25 to August 9.

Hill's Durban-based swimmers have been hit hard by the closure of municipal pools, particularly at Kings Park in Durban and Lahee Park in Pinetown, forcing them to turn to Virgin Active gyms.

The International Olympic Committee is considering various scenarios for the Tokyo Games amid the coronavirus pandemic but cancellation is not one of ...
Sport
2 years ago

And the problem is even more dire around the world, said Hill, also chairman of the coaches committee of Fina, the world governing body for swimming.

He has received emails from international colleagues detailing the impossible conditions they face. One coach in Spain hadn't been able to set foot outside his apartment for the last week, Hill said.

Swimmers and athletes at Tuks in Pretoria are still all right for the moment, as the pool and track have been kept open for Olympic hopefuls, like world championship 200m breaststroke silver medallist Tatjana Schoenmaker and sprinter Clarence Munyai.

Reigning Olympic 400m champion Wayde van Niekerk, who has yet to qualify for Tokyo, was also able to train at the Free State University in Bloemfontein, his agent Peet van Zyl confirmed.

But with meets being cancelled and postponed at home and abroad in April and May, he has fewer chances to beat the 44.90sec standard before the June 29 deadline.

His bigger challenge, however, will be securing enough action to be race sharp should the Games proceed as planned. 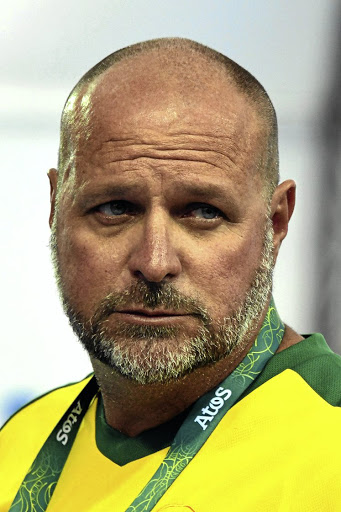 Coach Graham Hill believes the Tokyo Olympics should be postponed to give competitors a fair crack at qualifying and preparing adequately.
Image: Supplied

Chad Le Clos has booked his butterfly spots, but not yet in the 200m freestyle, where he won Olympic silver at Rio 2016.

So far only 13 South African athletes and six swimmers have qualified in individual events for Tokyo, with several others in both codes on the fringes, including Erin Gallagher, who trains under Hill.

Just one of Barrow's three rowing crews have qualified to date.

In all, only 53% of athletes across all Olympic codes worldwide have qualified.

Barrow's rowers have been in camp at Katse Dam in Lesotho, pumping out good performances, spearheaded by 2016 Rio silver medallist Lawrence Brittain.

"Lawrence has had the best six months of his life," said Barrow. "He's in better shape than he was before Rio."

"We've been very fortunate, but the rest of the world, especially Europe, have not been ... We know people in Italy and that country is in devastation."

Barrow said it was possible his rowers might have to train in isolation at home after they return from camp in a week or so.

Hill said his swimmers were taking a break now - as opposed to the break they would have taken after the SA championships that had to be postponed - in the faint hope the situation normalised by President Cyril Ramaphosa's April 14 deadline.

But he expects the pandemic to last longer than that, given the cancellation of sporting events in late May, like the Monaco F1 Grand Prix. "I don't know how they think, six weeks after the Monaco GP, we're going to be ready for the Games. How do you prepare for the Olympics?"

Hill pointed out that athletes had just three months left to train properly for Tokyo, from April to June.

"If we're under pressure for two of those three months, it's impossible."

It remains to be seen how long the International Olympic Committee (IOC) can resist the now quickly growing calls for a postponement, with even the coaches of retired greats Usain Bolt and Michael Phelps - Glen Mills and Bob Bowman - joining the chorus.

Barrow believes pushing ahead with the Games schedule would contravene the ethos of the Olympics.

"It doesn't seem fair or right. If you win, you want to win on even terms. The Olympic spirit is being pushed here. We all want to win, but what about the elements of unity and sport bringing people together?"

Barrow also raised the question of the mental health of athletes who are trying to train in excruciating conditions amid Covid-19 fears and general uncertainty.

He added there were extra complications for disabled athletes preparing for the Paralympics, to take place in Tokyo from August 26 to September 6.

Many are supposed to get classified by specialist panels at official qualification events, many of which have been cancelled.

The multibillion-rand industry that is South African sport, underwritten by TV rights and sponsorships, faces a rocky future during the coronavirus ...
Sport
2 years ago

This is no time for squabbles

With the cases rising daily, the situation requires steady heads
Sport
2 years ago

Chad Le Clos landed to an uncertain future in Cape Town this week after the rampant coronavirus forced him to beat a hasty retreat from his training ...
Sport
2 years ago