This is no time for squabbles 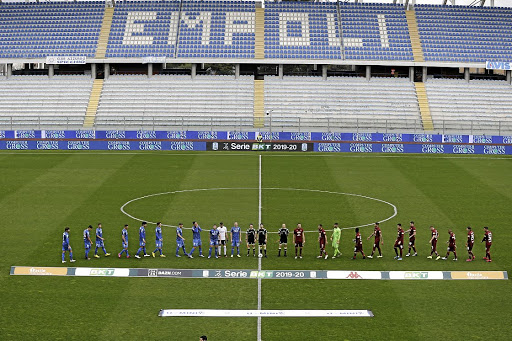 A football stadium on match day with no fans. The scene at an Italian Serie B match between Empoli FC and Trapani this month.
Image: Getty Images

Is Nathi Mthethwa okay or is there a big, black rubbery thing that is broken and affecting the faculties of the minister of sport from functioning in full mode?

Sometime during the course of the week, as the country and the world deals with the coronavirus monster, it certainly appeared as though Mthethwa's lift did not go all the way upstairs.

Last Sunday the commander-in-chief of SA, President Cyril Ramaphosa, declared a state of disaster in the wake of the coronavirus that is dealing a devastating blow worldwide.

Minister of health Zweli Mkhize has resembled a real general as the face and voice at the forefront of disseminating information to keep South African citizens abreast, with a daily dose of the latest developments.

Not only are we in a state of disaster, Mkhize has already flagged that the situation is so serious it has the potential to graduate to a state of emergency.

With the cases rising daily, it is clear that the country is confronted with a health calamity. The situation requires steady heads.

Mthethwa fell offside when he intimated that the Premier Soccer League (PSL) could play its matches.

With the cases rising daily, it is clear that the country is confronted with a health calamity. The situation requires steady heads

"As we speak, they can have their match tomorrow with no spectators. Even if we are going to reach a point where there may be no matches, it will be gradually phased in. But there is an obligation on them to follow to the letter the health and hygiene protocols as outlined by the department of health.

"They have said that players will wash their hands ... using water and soap. They have said on their own that when the match starts, there will be no handshakes as per tradition. They also know that you will need sanitisers.

"What we are emphasising here is when players are celebrating, they must do it individually. It is a change of behaviour because if we don't do that we will be spreading the pandemic.

"We need the [PSL] chairman [Irvin Khoza] and others in the leadership positions in sport to raise their voice against this pandemic ... They will continue with their matches without spectators and finish the season.

"The most important thing for us is that when they do that, they will be spreading the message to fight against this pandemic - so that there is no confusion."

This assertion left many people on twittersphere wondering whether in Nathi we had a nutter prepared to play kopi dice with the lives of players.

There is an obligation on all of us to do whatever we can to contribute to efforts to contain, curb and stop coronavirus from spreading.

Shutting out supporters has been employed elsewhere as part of that containment strategy.

But as positive tests within the borders of the republic surged to over 240 and continue to climb daily, we've seen playing behind closed doors has proved not to be the trick.

In these trying times, a shutdown is the only viable solution as we all join in efforts to flatten the curve.

Part of the response plan as announced by Ramaphosa is that there should be no gatherings of more than 100 people.

Even without spectators, people who participate in staging a soccer match are above 100 when you include the two teams, substitutes, technical teams, paramedics, security and television production crews.

Continuing to play would have flown in the face of the government regulation of social distancing.

In all the developments of the last few days, there appeared to be a low-key warfare between Safa and the PSL.

This is no time for brinkmanship by Safa and the PSL to show who is in charge. This coronavirus monster cannot be used like some kind of turf war as is the case with their continued fight over the colourful Outsurance outfits the misfit referees should or should not wear.

To entertain a decision to play PSL games behind closed doors was not a well-considered move.

Of course there are contracts and legalities to consider.

But, frankly, contracts can't be cast in stone and people can't be beating the pathway of profits superseding everything in this time of crisis.

In these trying times, preservation of life trumps everything. Situations can be reviewed the sooner the curve is flattened. No-one knows when that will be.

In these trying times, unity supplants everything. The politicians who can make a nuisance of themselves in the House of Chaos showed the way when leaders of different political persuasions presented a united front in their pledged solidarity to fight the pandemic.

Our soccer bosses can take a leaf from that. Mthethwa appeared to be bending over for soccer yet putting his foot down on the Comrades Marathon Association, which put out a statement saying its show will go on.

"It was an irresponsible statement that was made earlier today [Tuesday] by Comrades Marathon that they will go on like nothing has happened. We want to reiterate that nothing will go on - Comrades Marathon will never go on. We are dealing with the problem of the highest proportion here."

In this instance the minister has a point. Even those who have qualified - all 12,000 of them - still have to sharpen themselves for the race.

Even if Comrades were to happen on June 14, there is still an issue for qualifiers

Where will they race if Athletics SA (ASA) has rightly postponed all athletics events in the country at all levels for 30 days due to the coronavirus outbreak?

Even if Comrades were to happen on June14, there is still an issue for qualifiers.

Those people who have not qualified still would not have had an opportunity to qualify. Ultimately what they will do is postpone it if they don't want to cancel it, given the uncertainty,

In reality, seeing all these daily spikes, they should have a different approach.

The odds are that the Comrades Marathon will be postponed unless there is a miracle flattening of the curve. Even if the curve is flattened you can't stop safety measures, you still have to do everything in your power to push down this thing.

Chad Le Clos landed to an uncertain future in Cape Town this week after the rampant coronavirus forced him to beat a hasty retreat from his training ...
Sport
2 years ago

French outfit steps in as new kit sponsor for Bafana