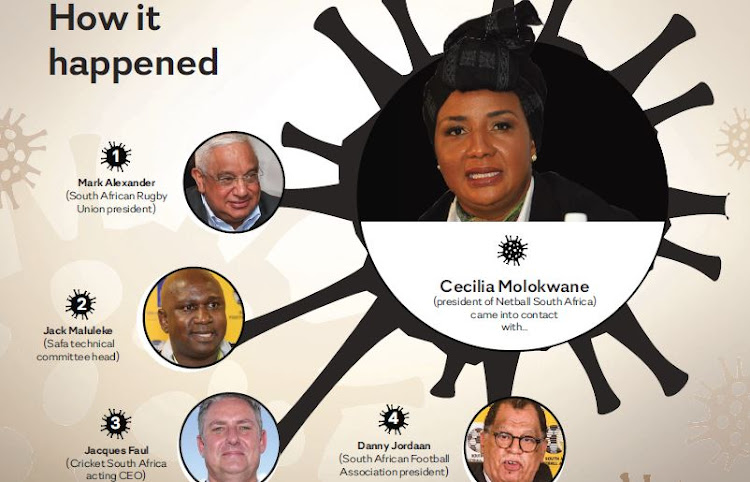 SA's pantheon of sports leaders were potentially exposed to the coronavirus at a recent ministerial meeting attended by their netball boss Cecilia Molokwane, who subsequently tested Covid-19 positive.

Molokwane attended a meeting of about 50 sports leaders - from soccer bosses Danny Jordaan and Irvin Khoza to athletics head Aleck Skhosana - called by minister Nathi Mthethwa in Pretoria last Tuesday to discuss the effects of the virus on sport.

"I sat right next to her," said SA Rugby president Mark Alexander, who holed up in a room at his Northcliff home after learning this past Tuesday that she had tested positive. "I was gobsmacked. It's scary, it's very scary."

He went for a test later on the Tuesday and learned on Friday he was in the clear. It was the second time he had been tested in a matter of weeks, following a trip to Paris and London on World Rugby business.

"I had a terrible flu. My eight-year-old boy, 17-year-old daughter and my wife, we all had flu

Sitting on the other side of Molokwane was Jack Maluleke, the head of Safa's technical committee, who subsequently went down with 'flu-like symptoms.

"I had a terrible flu [after the meeting] at home. I've got an eight-year-old boy and my daughter is 17 and together with the wife, all four of us we were down with flu. So we were not aware of anything until we got the news that [Molokwane had tested positive].

"So we immediately went to the doctor to check ourselves but we were advised to go and do the tests ... The whole family has done the test and we thought we should quarantine ourselves," he said. Maluleke and his family got their results yesterday and they were all negative.

Safa acting CEO Gay Mokoena, Natasha Tsichlas, Mxolisi Sibam and Dominic Chimhavi were part of the Safa delegation. "We learnt of the positive status of [Molokwane] and as part of the initial precaution, decided all of us to go into self-quarantine," said Chimhavi.

Durban-based Skhosana said he underwent a test the day after the meeting having spent time at a Johannesburg airport hotel with lots of foreign travellers. "I did the test and I'm fine," he said on Friday morning, soon after training in his back yard.

Premier Soccer League (PSL) chair Khoza was self-isolating. "The safest thing is to isolate yourself. You can't do anything, if there are no signs you can't test."

Swimming SA president Alan Fritz and Tsholofelo Lejaka, CEO of professional boxing, took no chances despite greeting Molokwane with elbow shakes. "It was still a fresh and exciting thing," recalled Lejaka, who went for a test. His too came back negative.

Fritz decided not to take the test unless he developed symptoms. "I'm going to sit it out and see what happens. I've got no symptoms."

Cricket SA CEO Jacques Faul also is at home. "My wife actually checks my temperature every half an hour," he said. Mato Madlala, acting CEO of the PSL, is getting house calls from his doctor. "So far I am fine."

I sat next to her. I was gobsmacked. It's very scary

Molokwane, who learned she was infected after travelling to the UK for 2023 Netball World Cup meetings, also attended a SA Sports Confederation and Olympic Committee (Sascoc) board meeting.

Acting Sascoc president Barry Hendricks had gone into self-isolation and advised his executive to do the same. "Of course it's a concern for me and my family. My wife is asthmatic."

He said he had questioned safety practices at the ministerial meeting. "I asked why we were signing the register with the same pen." Alexander also questioned the wisdom of having physical meetings instead of using technology to link up. "To have a meeting like that in a confined space [was not a good idea]."

Mthethwa had attended a meeting on Wednesday, his spokesperson, Masechaba Ndlovu, confirmed.

"I can just say that we're all just self-isolating as best as we can but because of the fact that we're special services workers, we're permitted to move around and we have a job to do," she said.