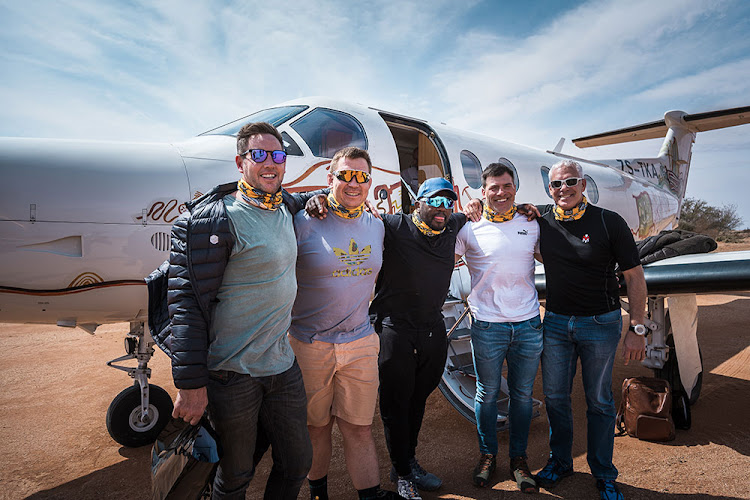 Four teams of some of SA's favourite sports personalities are this month embarking on an all-out endurance race against time through the Northern Cape desert.

On Sunday, “Team Rugby” arrived in Kenhardt, a small town close to Verneukpan, the large salt pan famous for hosting attempts to break the land-speed record and now the scene of the BrightRock Battle of the Sports.

Over the next five weeks, this team and three more drawn from the ranks of running, soccer and cricket will take to Verneukpan on foot, one team at a time, to travel 200km in only four days — all while pulling along their provisions on a light cart fitted with mountain-bike tyres.

They are competing not only to defend their sport’s honour and to prove which sport produces the toughest athletes, but also to raise money to help fight the Covid-19 pandemic in SA.

'Ultimate race of a lifetime'

Clive Grinaker, founder of Events to Aid and sports marketing company Grinsport, said the goal of the challenge was to raise R50m to help protect vulnerable populations in SA from Covid-19 and to provide personal protective equipment and oxygen to patients and healthcare workers in critical-care facilities.

“This event is the ultimate race of a lifetime — a race between sporting athletes and, ultimately, a race against time to support not only the front-line workers who continue to put their lives at risk each day, but also the oxygen ecosystem and vaccination rollout in SA with our NGO partner, Right to Care.”

TimesLIVE and the Sunday Times will over the next five weeks publish regular updates on how the four teams are faring at Verneukpan and how the challenge is progressing.

An advisory panel that comprises Prof Ian Sanne, co-founder of Right to Care and a specialist in infectious diseases; Prof Glenda Gray, president and CEO of the SA Medical Research Council; and Prof Shabir Madhi, professor of vaccinology at the University of the Witwatersrand will help Events to Aid channel the funds that are raised to the areas identified for Covid-19 relief.

“At BrightRock, we work hard to help people navigate life’s big changes and, in doing so, we have learnt that even during life’s most unexpected changes, one can find positive opportunities,” said BrightRock deputy CEO Suzanne Stevens.

“We also have seen that sport, with its inherent unpredictability, provides the perfect platform for this message of embracing change. Sport unites people by bringing our sports legends together with all South Africans to effect the changes we wish to see in our society and, in this case, it can help alleviate some of the impact that Covid-19 has had on our country.”