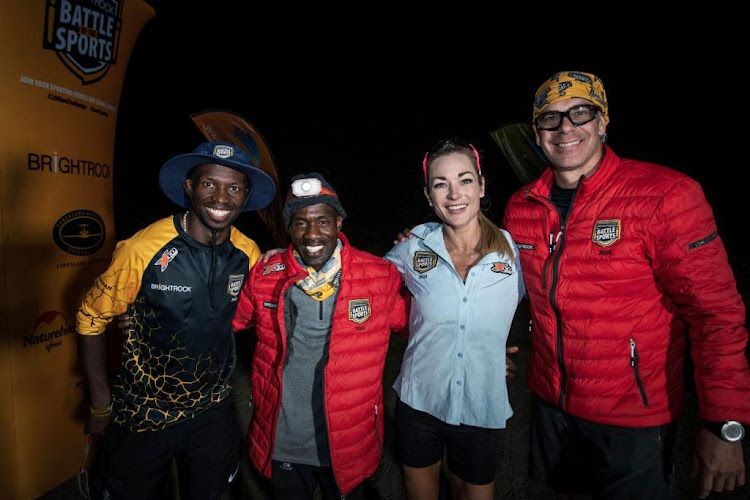 A team of top SA ultra-marathon and Comrades runners returned from Verneukpan in the Northern Cape on Sunday after setting a blistering pace in the BrightRock Battle of the Sports 200km endurance race and Covid-19 fundraiser.

Despite at least 13 punctures, mechanical issues with their supplies cart and the loss of injured expedition leader Erik Vermeulen, who fell just 40km in, the dynamic trio of Bongmusa Mthembu, David Gatebe and Jenna Challenor completed the challenge in an excellent time.

“The mental toughness of these experienced runners who were totally committed to setting a record pace really came to the fore over the last 30km,” said team manager Bruce Fordyce.

The finishing times of the four teams in the challenge will not being revealed until the final competitors, Team Cricket, have circumnavigated Verneukpan.

According to Vermeulen, the challenge designers thought that adding in a 250kg cart as a fifth team member would be a leveller between the sporting codes to prevent the teams playing their natural strengths.

“I could not have been more wrong with Team Running. They completely took control of the cart and were exceptional athletes,” he said.

“Right from the start, I thought my biggest challenge was going to be slowing this dynamite team down so they didn’t overstretch initially, but they proved me wrong,” added Vermeulen.

“The endurance of these athletes is incredible. They were averaging 6km/h–7km/h initially and then upped the pace so at times they were doing 14km/h. It was also so interesting to see the difference between the rugby team, which was all about power, grit and determination, and the runners, who are all about speed and determination. They literally surpassed every challenge we gave them.”

High spirits ... but beware the cart

Arriving home on Monday, the runners' team spirit remained high and they were already talking about their next running challenge in Cape Town.

“We are so proud of what we have achieved and so grateful to our sponsors and to the organisers for giving us this opportunity to compete and do something for the good of all South Africans,” said Gatebe.

Mthembu only had praise and gratitude for his teammates. “Jenna has done phenomenally well and David is our young small lion. I feel so grateful we were able to inspire millions of people and so grateful for the opportunity to do this challenge,” he said.

“At the end of the day it has been an awesome adventure,” said Challenor. “Yes, it was really tough at times, but well worth the effort. Our message to the remaining two teams is simple. Beware the cart — it is really tough — but other than that just enjoy the adventure. You will love it.”

All funds raised during the BrightRock Battle of the Sports will be used to support Covid-19 care and critical treatment in SA.

Film your event — you can also do more than one — and upload the footage onto the challenge's Facebook or Twitter page, or via Instagram. Use the hashtags #200kmchallenge #lovechange when posting.