Team Soccer is the third team of local sports champions to compete in the Battle of the Sports, a Covid-19 fundraiser 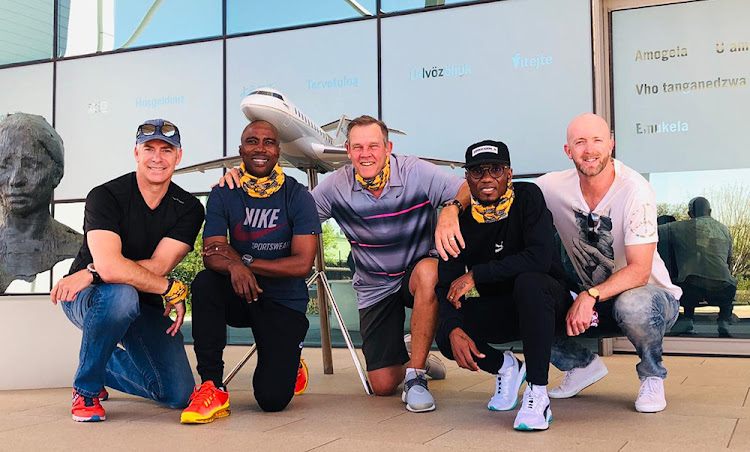 Looking strong and ready to tackle any obstacles, a team of SA soccer stars on Monday started the 200km BrightRock Battle of the Sports endurance challenge and Covid-19 fundraiser at Verneukpan in the Northern Cape.

Booth, who retired in 2014, was looking forward to being part of a team again and challenging himself. “My challenge will be keeping up with Siya, who is still playing professional football, and Teko, who is still very lean and quick,” he said. “Compared with the rugby guys, however, we are all sleek and light on our feet and I think this will be a big advantage.”

Modise is regarded as one of the greatest Premier Soccer League (PSL) players of the modern era. Known as “The General” for his ability to direct play, he has won two PSL Footballer of the Year awards and six trophies, including two PSL titles, the Nedbank Cup, Telkom Knockout, the CAF Champions League and the CAF Super Cup — all while playing for Mamelodi Sundowns. He made 66 appearances for Bafana Bafana, scoring 10 goals.

“I have a naturally competitive nature, and pitting our skills against other codes is something we have never done. As Team Soccer, we need to push ourselves further as footballers and this is a great opportunity,” he said this week.

'Not too much of a challenge'

Nomvethe said the soccer players' mental strength would be a big advantage. “We know it is going to be tough, but we are all used to playing in inhospitable stadiums and environments, particularly in Africa, so the terrain should not be too much of a challenge.”

Tovey was confident that Team Soccer would do well. “If you are a soccer fan, we appeal to you to support this worthy challenge with a small donation,” he said. “As soccer players we have led a blessed life and now is our chance to support those people affected by the pandemic.

“Your support will make all the difference. It’s about much more than just the bragging rights; it’s about helping the thousands of South Africans who need support — and we will never lose sight of that important goal. If we can inspire our hundreds of thousands of soccer fans to support us and make a small donation, we will have done our job.”

Film your event — you can also do more than one — and upload the footage onto the challenge's Facebook or Twitter page, or via Instagram. Use the hashtags #battleofthesportschallenge #lovechange when posting.

From stadium to desert: SA soccer stars ready for Battle of the Sports

Teko Modise, Siyabonga Nomvethe and Matthew Booth take part in Covid-19 fundraiser – and you can help too
Sport
1 year ago