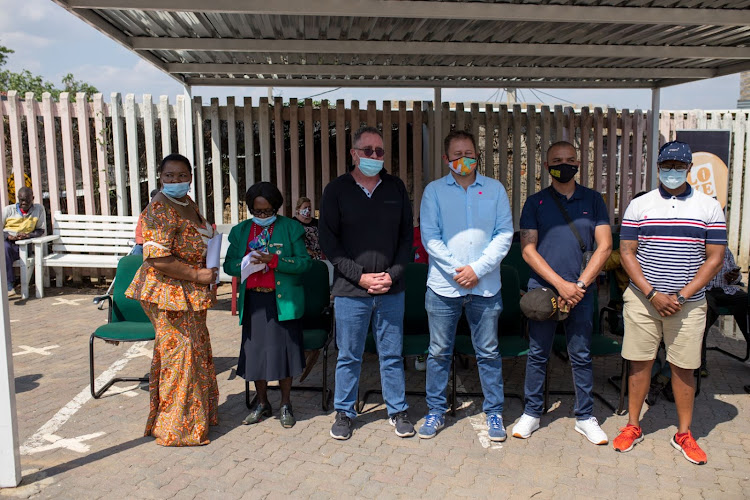 The Itlhokomeleng Association for the Aged and Disabled in Alexandra, Gauteng, has received food parcels and protective masks courtesy of the organisers of the BrightRock Battle of the Sports endurance challenge now under way in the Northern Cape.

The challenge is raising funds and awareness to support vulnerable groups and communities in SA affected by Covid-19.

The parcels and masks were delivered on Friday by staff members from Right to Care, the Covid-19-orientated NGO that has supported old-age homes and older people across SA, and event sponsor BrightRock.

Precious Robinson, Right to Care chief technical specialist for preventative care and treatment, said SA's elderly people, as the group with the highest level of co-morbidities and weakest immune systems, had to be prioritised. “We have provided support to over 3,000 aged people in care facilities already, with plans to scale up,” she said.

The Itlhokomeleng association was founded in 1978 by Dr Marjorie Manganye, who at 89 is known as the “Mother Teresa of Alex”, and a group of concerned women to help the aged and needy in Alexandra.

At Itlhokomeleng, which means “help yourselves”, Manganye now cares for scores of frail and elderly people, although she herself is older than many of her charges. The home also admits disabled people, regardless of age, and feeds about 180 people in the community.

In 2017, the University of the Witwatersrand bestowed an honorary doctorate on Manganye for her lifelong dedication to the ill, frail and elderly.

Soccer star Matthew Booth joined the handover on Friday to speak about his personal experiences in the 200km Battle of the Sports race against time at the arid Verneukpan in the Northern Cape. “Seeing the strength of Manganye and the amazing work she is doing makes our whole challenge so worthwhile,” he said.

He also congratulated BrightRock's "change captains", Dan Nicholl, OG Molefe and Nicholas Goliath, who, in support of their favourite rugby, soccer, cricket and running champions taking part in the Verneukpan challenge, also participated in their own Battle of the Sports challenges to raise funds.

Goliath will be the last of this group to complete his challenge this weekend. All funds will go to Right to Care, which will match the donations rand for rand.

BrightRock founder Sean Hanlon said: “We are so proud to be able to make a contribution, particularly to a home like Itlhokomeleng, which cares for the most vulnerable in Alexandra. The BrightRock Battle of the Sports challenge is a fitting way to emphasise the teamwork, passion, endurance and commitment, as well as the mental, emotional, and physical fortitude, to create positive change for the most vulnerable in our community.”

Adventurer Erik Vermeulen looks back on 600km journey through desert