Sebastian Vettel backs Schumacher to replace him at Aston Martin 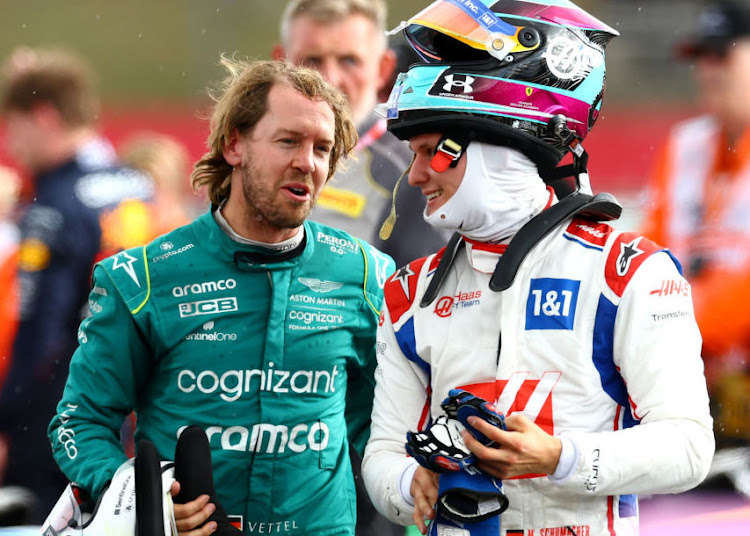 Sebastian Vettel (left) has backed friend and fellow German Mick Schumacher to replace him at Aston Martin when the four-time Formula One world champion retires at the end of the season.
Image: Mark Thompson/Getty Images

Sebastian Vettel has backed friend and fellow German Mick Schumacher to replace him at Aston Martin when the four-time Formula One world champion retires at the end of the season.

Vettel, 35, announced his retirement on Thursday with immediate speculation about who might be his successor alongside Canadian Lance Stroll at the British-based team.

“I do have my opinion. I mean, I think very highly of Mick,” Vettel told reporters at the Hungarian Grand Prix, the last race before the August break.

“I’m obviously not entirely objective, because I’m very close to him. But I do think he’s a great driver. And he’s a learner, he keeps learning when others sort of stall, or stop making progress,” he added of the 23-year-old.

Vettel said the decision was for the team to make but he would “not hold back” his opinion if asked.

The German is close to the Schumacher family, with Mick’s father Michael, the seven-time world champion and Ferrari great, a boyhood hero of Vettel’s.

Schumacher senior has not been seen in public since he suffered serious head injuries in a skiing accident in the French Alps in 2013.

Vettel has taken on something of a mentor role for Mick since his compatriot joined the Ferrari-powered Haas team in 2021 after winning the Formula Two title.

The Ferrari-backed driver has taken time to open his account, unable to score a point last year but finishing eighth and sixth in Britain and Austria this season.

Schumacher is out of contract at the end of the year.

Meanwhile, Alfa Romeo has renewed its Formula One partnership with Swiss-based Sauber for next season, Alfa CEO Jean-Philippe Imparato said on Friday. “I have signed the renewal for 2023 this morning,” he said.

He said Formula One was a “school of excellence” and part of its DNA for Alfa Romeo, a brand of Stellantis, the world’s fourth largest carmaker.

“Every year in July we assess the situation. If in the future we realise we are not interested any more (in Formula One) or we don’t have returns on our investments, we’ll see what to do, but everything will be done in an orderly way,” Imparato said.

Sauber, who own and run the team under the Alfa name, are controlled by Islero Investments, who are in turn linked to Swedish billionaire Finn Rausing.

US motor racing entrepreneur Michael Andretti, who is looking to enter Formula One, last year held takeover talks with Sauber but said “control issues” had led to their collapse.

The team have more recently been linked with Audi, a Volkswagen Group brand seeking to come in when new engine rules apply from 2026. “For the moment it (the Sauber partnership) is a fantastic, common vision,” Imparato told www.the-race.com this month.

“If one day something else occurs, it will not be a problem. We will develop ourselves in another way, in another world, always based in motorsport, for Alfa Romeo.”