Rock for charity in Jozi 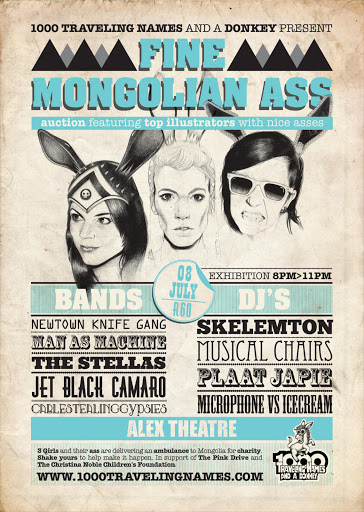 The Fine Mongolian Ass showcase is in support of a road trip to Mongolia, with an ambulance to be donated.
Image: Supplied

Rock and indie bands will bring the noise to Braamfontein tonight – in the name of charity at the Fine Mongolian Ass party.

The event’s been organised by founders of 1000 Traveling Names and a Donkey website trio – Joanne Theron, Shannon Davis and Gene Arundel.  It will take place at the Alexander Theatre.

The trio is raising funds for two charities –  the Christina Noble Children’s Foundation (CNCF) and the Pink Drive Campaign – and for a road trip to Mongolia.

“The Pink Drive Campaign is very close to our hearts, because Gene’s mom has breast cancer,” said Theron. “We’re going to road trip from London on 23 July all the way to Mongolia to deliver an ambulance to a clinic.”

The line-up will include Man as Machine, Cable Stealing Gypsies, Jet Blach Camaro and the Newtown Knife Gang.

The night’s festivities will also include an exhibition of illustrations of the trio’s mascot – a donkey they call Dan.

“We contacted illustrators from Johannesburg and asked them to illustrate what a donkey would look like: the ears or the actual donkey itself,” said Theron.

It’s R60 to get into the gig, but for an extra donation of R40 revellers get a silk screen illustrated poster, be entered into a draw for giveaways that night and have their name written on the ambulance.

Theron said: “We chose the name 1000 Traveling Names and a Donkey, because we wanted to take 1000 people with us on our journey to Mongolia by carrying their names on the ambulance. We have just over 200 names so far.”

Along with the live bands, DJs Skelemton, Musical Chairs, Plaat Japie and Microphone vs Icecream will be on the decks.