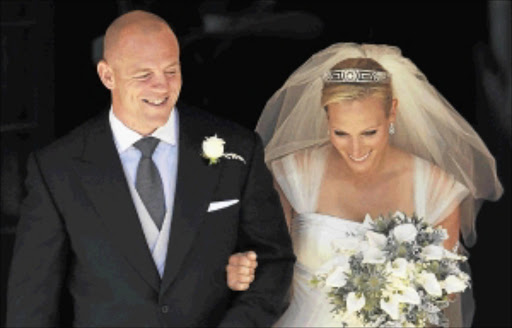 The couple, both world-beating sports stars, wed in a private ceremony at Edinburgh’s Canongate Kirk attended by all the senior royals, including Prince William and Catherine, and some of the biggest names in English rugby.

But the wedding was a stark contrast to William’s marriage to the former Kate Middleton on 29 April at Westminster Abbey, which was attended by 1,900 guests and watched on television by an estimated two billion people worldwide.

After a ceremony lasting about 45 minutes, Phillips, 30, and Tindall, 32, emerged into the sunshine and shared a kiss in front of hundreds of well-wishers outside the church on Edinburgh’s famous Royal Mile.

Phillips, a former equestrian world champion, wore an ivory silk gown by British designer Stewart Parvin, a favourite of the queen, with a veil held in place by a tiara lent to her by her mother, Princess Anne.

The dress had straps over her shoulders and a subtle train, and the full skirt created a surprisingly traditional look for the one-time “royal rebel” who used to wear mini-skirts and low-cut tops.

Tindall, who played in England’s 2003 World Cup-winning team and  captained the side in their victorious 2011 Six Nations campaign, looked smart in a formal tailcoat and smiled broadly as he walked out with his new wife on his arm.

The queen wore an apricot wool coat also by Stewart Parvin, while the guests included her daughter Anne and son Prince Charles with their spouses.

But the well-wishers saved their biggest cheer for William and Catherine, who wore a cream coat dress believed to have been recycled from a previous occasion.

After the ceremony, guests headed to a reception at the nearby Palace of Holyroodhouse, the queen’s official residence in Scotland, and music could be heard playing inside the venue which was bathed in early evening sunshine.

The queen and her husband Prince Philip were expected to stay for the cutting of the wedding cake and some speeches before leaving the younger guests to party.

Celebrations started on Friday night with a drinks reception on the Royal Yacht Britannia, which is moored in Edinburgh’s port of Leith.

The official wedding picture was released after the ceremony, showing the newlyweds embracing against the dramatic backdrop of the ruins of Holyrood Abbey, which is at Holyroodhouse.

The photograph was yet another contrast with the wedding of William and Catherine, whose official portrait was taken in the regal splendour of Buckingham Palace.

Phillips is planning to keep her maiden name after the wedding because of the importance of her name to her sporting career and her sponsorship deals, breaking a royal tradition that dictates she  would become Zara Tindall.

The commitment of the newlyweds to their sporting careers was further highlighted by their decision to put off taking a honeymoon  straight after the wedding, so they can return to training for events in the coming days.

Phillips and Tindall met in 2003 in Sydney, as the England squad  celebrated winning the World Cup. The jovial, broken-nosed Gloucester captain claims it was his “pure charm” that won her heart.

Tindall was supported at the wedding by best man Iain Balshaw, his former Bath and England colleague who was sporting cuts on his left eye from a recent moped accident.

“I think it’s really good that they’ve chosen Edinburgh to get married,” said Mary, a 58-year-old Scottish woman among hundreds watching the guests arrive at the church.

“I think she’s just a really nice person and I think it’s good that they’ve chosen something that suits them.”