Zahara CD has fans in a frenzy 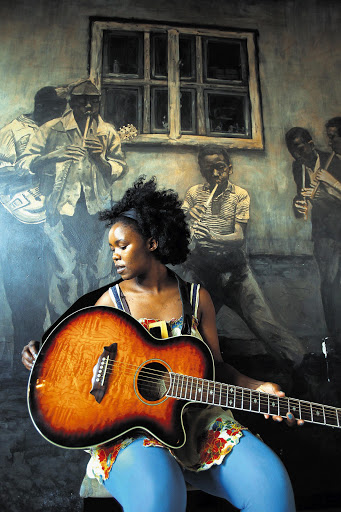 Eastern Cape singing sensation Zahara has been on a musical high since her debut album, Loliwe, went platinum, just 13 days after its release.

At a time of plummeting CD sales, her album - which is a mixture of neo-soul and Afro-pop sounds - has already sold in excess of 40000 units.

"It's even more overwhelming because it's my debut - it means people believe in my dream, and they love my music," said the 23-year-old at the SABC offices in Johannesburg, where she was doing radio interviews yesterday.

Dressed in a colourful tank top over blue leggings and platforms, the singer, real name Bulelwa Mkutukana, smiled as staff at the SABC stared and waved at her.

Even former Metro FM presenter Lupi Ngcayisa stopped her for a picture.

On her way to another interview with Kaya FM in Newtown, Johannesburg, Afro-pop singer Ntando stopped her for a short chat. Staff at the restaurant he was in complained that they couldn't find her CD anywhere, and begged for pictures.

She expected none of this when she began recording her album a few months ago.

"It's been awesome and humbling at the same time, because when you think about it, it's been 13 days and my album has already sold platinum," she says.

Thembinkosi Nciza - who, with S'bu Leope (DJ S'bu), owns TS Records, the record label that Zahara is on - met Mkutukana after seeing her play in East London last year.

Nciza said he called to meet her three weeks later, with his wife, Mafikizolo singer Nhlanhla Nciza, in tow.

"When they came back, I played for her, and they told me they were going back to Joburg with me. That was the first time I had set foot in Joburg, or on a plane," she enthuses.

Zahara has been compared to other local singers including Simphiwe Dana, Miriam Makeba and even US star Tracy Chapman.

She is booked to play in France at the end of this year and in Holland and the US early next year .