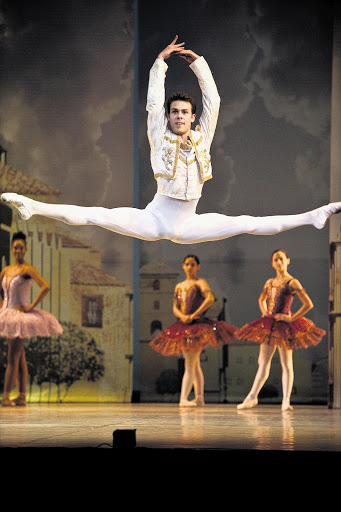 Aaron Smythe from Australia in the role of the barber Basilio in the ballet Don Quixote Picture: VAL ADAMSON

Don Quixote the ballet, based on an episode from Miguel de Cervantes's classic novel, may be difficult to perform but it is certainly easy to watch. Vibrant, pacey and marvellously dramatic with dollops of humour and a cast of engaging characters, the production moves in literal leaps and bounds, accompanied by swirling capes, macho toreadors, and sizzling passion.

The story is simple. While on their quest, Don Quixote and Sancho Panza come across Basilio, a poor barber, and his beloved, the sassy Kitri. Kitri's father wants his daughter to marry the rich and ridiculously foppish Gamache, but she will have none of it. They run away, a chase ensues, Don Quixote jousts at a windmill, there's a mock suicide and eventually, love conquers all and Kitri and Basilio marry. But it's not the story that makes Don Quixote so engaging; it's the dramatic ability of the dancers, coupled with their technical prowess and evident delight in their roles.

It's also the troupe of male dancers, sensual, controlled and so utterly masculine in their performance. What a delight to watch a ballet where male dancers are given a shot at centre stage.

What makes this production noteworthy (aside from the fact that it is the first time in 17 years that SA audiences will have a chance to see the ballet in its entirety) is that it is the product of an ambitious and brave collaboration between Dirk Badenhorst's Mzansi Productions and the largest ballet school in the world, the National Ballet School of Cuba.

Exchanges and visits from Cuban students and teachers began in 2008 and have culminated in this production, which includes dancers from two Cuban schools and three professional companies, as well as professional dancers from Canada, Australia and (homeboy Andile Ndlovu) from The Washington Ballet.

It's a veritable united nations of very young and very talented dancers.

Add to the mix that rehearsals took place simultaneously in different studios at opposite ends of the planet, and that in the Durban and Johannesburg performances a handful of local ballet students have the privilege of joining the corps de ballet. The result is nothing less than astonishing.

Classical yet accessible, this is the perfect ballet for those who have not yet engaged, or are reluctant to engage, with this art form.

The influence of the Cubans' vibrant and fresh choreography lends a richness to a production that should not be missed.

On the night I attended in Durban, where it has now completed its run, many in the audience were as young as those on stage and the rousing applause at the end, and the countless curtain calls, said it all.