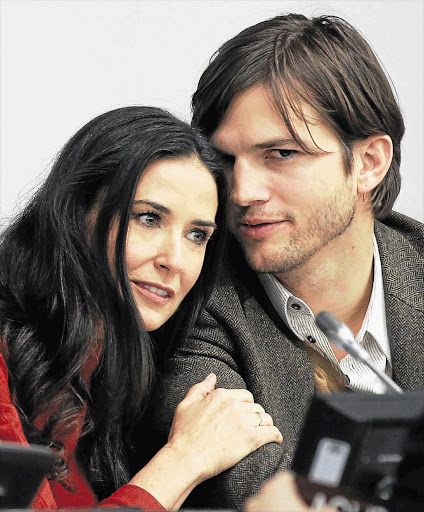 Actress Demi Moore and her husband, actor Ashton Kutcher, at a news conference in November. Rumours abound that their marriage is on the rocks Picture: BRENDAN MCDERMID/REUTERS

A humiliated Demi Moore has reportedly contacted a divorce lawyer after a last attempt to save her marriage to toyboy husband Ashton Kutcher failed.

London's Mail on Sunday reported that the marriage of Moore, 48, to Kutcher, 33, broke down after allegations that he cheated on her.

Kutcher allegedly had sex with Sara Leal, 23, in a hotel at the end of September - the weekend of his sixth wedding anniversary.

An insider told the newspaper: "Miss Moore has been totally humiliated. On Friday she consulted a lawyer about getting a divorce. The discussion included her living arrangements and how a divorce would impact her assets. She is worth $150-million and Kutcher is also worth close to that. This is a huge and very tough decision for Miss Moore to take but her trust has been shattered."

Leal, from Texas, allegedly had sex with an intoxicated Kutcher in a jacuzzi at the Hard Rock Hotel, in San Diego.

Kutcher is Moore's third husband. Her first was songwriter Freddy Moore and her second was actor Bruce Willis, with whom she has three daughters.

"She desperately wanted to save their marriage," the source told the newspaper.

"But the Sara Leal story was a hard one for Kutcher to deny because it was backed up by the seedy photos of him partying."

Moore reportedly agreed to go to Kabbalah counselling sessions with Kutcher. They were photographed separately outside their Kabbalah centre still wearing their wedding rings.

"But it hasn't worked. She is done with him," said the insider.

But Us Weekly magazine reported that the two appeared very much together at a service at the Los Angeles Kabbalah Centre on Friday night.

Though they sat on opposite sides of the aisle during the service - a practice followed at the centre - Kutcher gave Moore a hug afterwards.

Details of Kutcher's party have emerged thanks to a South African yacht worker, Jacques du Toit, whose girlfriend, Alexis, was also in the jacuzzi.

DuToit's friend, Gavin Naumoff, said: "Ashton [was] in a hot tub on the balcony with Alexis, Sara, a girl called Katie and another girl called Marta. They were all naked," he said.

"Ashton invited Jacques to join them in the tub. Apparently, Ashton said 'Yo, where's the vodka at?' and Jacques was like 'It's over there but I'm not going to get it.'

"So Ashton gets out to get the vodka and that's when Jacques saw he was butt naked."