Stopped in her tracks 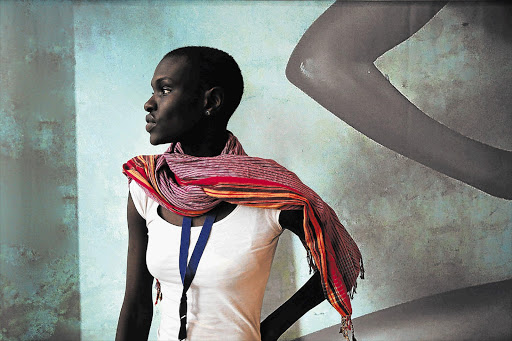 Amid the rush backstage where models were getting their hair and make-up ready for the start of Africa Fashion Week last night, Kenyan model Ajuma Nasenyana "disappeared".

The Kenyan-born stunner had been "stolen" by photographers forimpromptu shoots around the Sandton Convention Centre hours before design house Kluk CGDT was to open the week.

The Times grabbed the 1.78m tall, dark beauty for an account of her glittering career on the ramp as she was running between final fittings.

Modelling was just a fantasy for the 27-year-old beauty, who secured an athletics scholarship in Europe nine years ago.

"I used to run for Kenya and was a 400m national champion. So I appeared on a national newspaper, where some folk saw the picture and decided to track me down," she said.

Ford Models Europe then sent its own scouts to find both her and other potential models in the country's capital, Nairobi.

Eventually, she was persuaded to give up athletics for modelling.

Dressed casually in skinny jeans, sandals, a simple white top and a colourful pashmina scarf, Nasenyana does not look as if she gave birth to her son almost a year ago.

"Every girl is a model in her head. I used to look at magazines and admire the girls, but realistically I never saw me gracing magazine covers. I was going to be an athlete," she said.

A few years on, she has strutted on ramps in British designer Vivienne Westwood's best frocks, and was part of the Victoria's Secret line-up. She has also partied with US superstars Beyoncé and rapper Diddy, and appeared in catalogues for design house Lacoste and Japanese designer Issey Miyake.

About Westwood, she says: "She's so loyal and one of those clients that are always there for me. She's like a really cool grandma behind all the craziness."

Nasenyana is now considering giving back.

"I'm really honoured and so grateful that my life took this turn. Not everyone gets to experience this, and that's why I want to open my own agency in Kenya and do a model search because there are some great faces," she said.

"I want to go to the rural areas and find these faces, and maybe create a Kenyan fashion week."