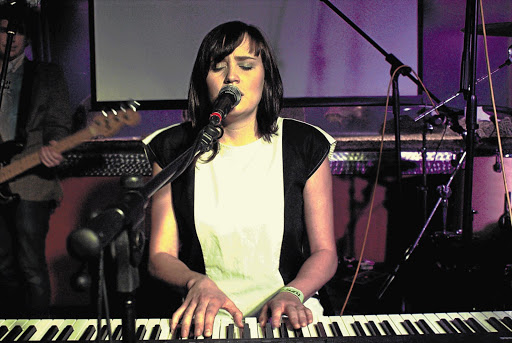 She sings about astronauts, archaeologists and hiding inside polar bears. She has the sweetest voice laced with acid lyrics. She’s girly with the soul of an old woman. Cherilyn MacNeil of Dear Reader presents a paradox, and an entertaining one.

MacNeil has a unique style. Under a mass of scarves, she is petite and delicate. Every move of her hands, be it over the rim of her coffee cup or her keyboard, is slight but powerful. She has an endearing cuteness about her, spiked with biting honesty.

Even her unrecorded children’s songs are “inappropriate for kids, but are more for big kids with a sardonic sense of humour,” as she sings about cutting her fingers off and her mother sewing them back on with thread.

She sips her coffee with a soft slurp and bursts into a grin. “It’s so good to be home!” After almost two years in Berlin, coming back to Johannesburg, she says, feels a bit weird. “This is home. It always will be. But then again Berlin is now home.”

MacNeil says this wasn’t always the case, and moving to Berlin was good – personally and musically – though she struggled for a while. “Being away makes you strangely more patriotic. I feel more connected to South Africa since I’ve been gone… wanting to discover more of what I took for granted.”

Even though she was born here, she says she always felt like a stranger in her own country. “There’s so much I don’t understand. It’s like I’m an alien here. I even wanted to be black so I could understand [South Africa] more. There is always that sense of ‘I don’t belong here’.”

Recording the latest album, Idealistic Animals,she says, was different in Berlin, taking her out of her comfort zone. “In a good way.” The process was organic and a setting free from restraints of having to make a flawless album.

Its reception has been organic too. “It’s been slow.” MacNeil says it takes a few listens to get into, not hitting you square in the face. “It’s darker, more complex, and not as accessible as Replace Why with Funny. All the same, there are many pop elements.”

In South Africa, Idealistic Animals has slipped under the radar, but Dear Reader’s recent local tour was received beautifully. “The tour was a chipping away at the ice surrounding this ‘non-South African’ album.”

“But it’s South African. This project is so much about me and my insecurities about home and who we are, and faith. Faith is a huge issue. Questioning what we are made of and what we believe. It’s coming to grips with the fact that there are no answers.

“It does feel strange seeing my face everywhere, though. I didn’t want myself on the album cover, but it happened that way... It makes it that much more personal and makes me rather vulnerable.”

MacNeil looks into her empty cup as she says feeling somewhat exposed is good. “This album is hard. The space I was in was not good. Writing was intense, and dense.

“I needed a type of layer... a protection of sorts. And I realised I can’t avoid all of what was going on inside because there are no answers. I’m in a much better space now... You learn to live with the questions and uncertainty.”

Being away and coming back, she says, has made her more aware of her changed reality. “We have such rich heritage and as much as I feel rootless, these experiences have given me strength to make anywhere I settle home.”

I’m grateful for that. I may not write music for listeners to feel or go through what I am going through, but to put it out there so that I can say all of it through such a beautiful medium.”