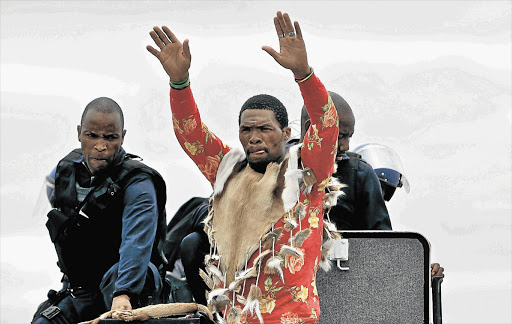 Maskandi singer Khulekani Mseleku, popularly known as Mgqumeni, who was believed to be dead and buried in 2009, has suddenly made a shocking reappearance Picture: TEBOGO LETSIE

The man who claims to be Khumalo and to have "returned to his family" at the weekend, has been arrested. He will appear in the Nquthu Magistrate's Court today on a charge of fraud.

The man was taken into custody on Sunday night after addressing thousands of followers who had flocked from as far afield as Lesotho to the small northern KwaZulu-Natal village to see for themselves if Khumalo had risen from the dead.

Doubts surrounding his claims of having been held captive in a cave, and living with "zombies" for two years, surfaced when he could not answer critical questions on his whereabouts, and when his physical appearance was examined - Khumalo did not have a gold tooth or deep scars on his face.

The man then called for Khumalo's body to be exhumed to prove he was indeed the popular musician.

After the family and fans demanded a DNA test and an exhumation, the police stepped in and questioned him.

KwaZulu-Natal police spokesman Colonel Jay Naicker said detectives opened a criminal case against the man after questioning him at length.

Family members - including Khumalo's grandfather and his wife, who had both believed it was indeed he - yesterday refused to comment on the arrest.

A woman from Nongoma is understood to be willing to testify in court that the man is a taxi driver who duped her family into believing he was hiding from someone who wanted to kill him for muti.

She alleged the man had arrived in Germiston late last year begging people for money so that he could take a taxi back to Durban.

"When he arrived at my shack, I was at work and the person who was in at the time asked him to wait for me so he could relate his story. When I arrived, he gave me his name and told me his mother was a matron at one of Durban's hospitals. He said he had been driving taxis for a certain Umlazi taxi owner. He claimed the taxi owner had driven him to Johannesburg and intended to kill him for muti," she said.

The woman, who refused to be named, alleged that the man told her he approached her family because he had heard one of Mgqumeni's songs being played in the house.

She said she took pity on him and allowed him to live with her family for a few days. She claimed to have given him R60 taxi fare. Other residents also made donations after being "touched by his experience".

"This man is a crook. He fooled us. But that was nothing compared to fooling the whole country by impersonating Mgqumeni," she said.