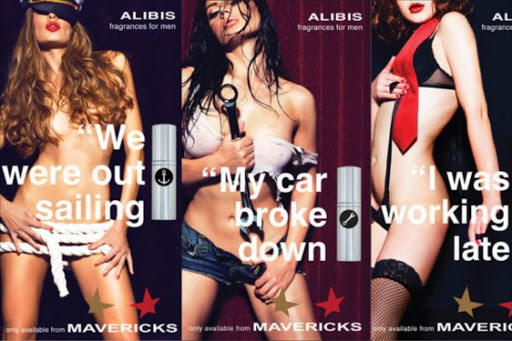 A gentaleman's club is relieved that the Advertising Standards Authority SA has dismissed complaints that its billboards advertising a range of fragrances are sexist and objectify women.

Mavericks Revenue Bar, in Cape Town, has launched Alibis fragrances, which, according to its website, "are particularly for gentlemen upon leaving the club".

But the company landed in hot water for its seemingly provocative billboards advertising the His and Hers fragrance.

The adverts were said to be of a "sexist nature", objectify women and "potentially harmful to children", and to underminefamily values.

But the ASA dismissed all the complaints last week.

"It was a stimulating campaign, which was certainly in line with the approach used by major European fragrance houses," said Harrison.

"If a consumer sees 'masturbatory implications' when looking at a woman holding a wrench, it is a problem perhaps best addressed in chambers outside those of the ASA."

The club is no stranger to controversy. It has been hauled before the ASA before for its billboards for a fragrance called I Was Working Late.

In November, the authority found that the model in the advertisement - dressed only in a bra, fishnets, red stilettos and a tie - "unduly objectifies the woman".