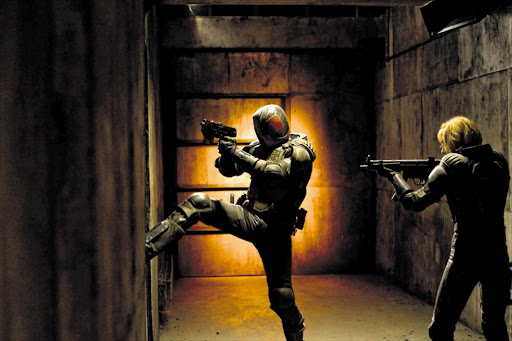 When I say Karl Urban, most people say ‘who?’

That dude who played Éomer in The Lord of the Rings? He was also Dr. Leonard "Bones" McCoy in the most recent Star Trek. You may remember him from previous roles in Ghost Ship, RED and Doom.

His most recent exploit: Dredd 3D. A massive role, but the massive actor was excited to bring his own interpretation to the role of the legendary comic character Judge Dredd.

The New Zealander is definitely no stranger to fame, yet he’s understated and quite quiet. Greeting me with a firm handshake, I can see one of the reasons he was cast. He’s huge and intimidating.

Shot in Cape Town, this is touted to be one of South Africa’s greatest international achievements in film.

“I had a fantastic time shooting this film,” he says, “and shooting in Cape Town was excellent.

“The brand new studio was world class and we had one of the best crews. They worked hard, and long hours too.”

Urban, a keen surfer and explorer, said the city was amazing for that. “It really is a great city and to shoot there on such a professional and large scale was great.”

He says the role of Dredd was also great, because he’d read the Judge Dredd comics since he was a teenager. “I thought he was tough and an enigmatic character from the future, and it was fun and an honour to be given the opportunity to recreate him.

“Mega-City One was incredible, and its feel of desolation was the best place to bring this part – this character – of my youth to life. [Writer Alex] Garland and [comic creator John] Wagner really have brought to life the Judge Dredd we’ve been waiting for for 35 years.”

Urban, though starting out quite cold and aloof, warms up as we get chatting about the dynamics of the film.

Urban says the film is different to the 1995 Judge Dredd, which was in keeping with the comic’s sci-fi atmosphere set in the distant future, with robots and flying cars. “That was more sci-fi and we’ve got a far more futuristic yet realistic, graphic feel with more realistic texture. The film, although as authentic as the comic was written, it has a more realistic feel.

“This is the near future – more believable and has soul... It’s total chaos and the decline of humanity in a world that needs saving.

Urban says his Judge Dredd is very different from Sylvester Stallone’s character from the ‘95 adaptation and it was a challenge to recreate this iconic character. “This film kind of humanises Judge Dredd. He’s just a man who loves his bike and just so happens to be doing the most dangerous job in the world.

“His heroism is something great, I mean he’s the one walking into the face of danger when everyone else is running away from it, because it’s the right thing to do. His lack of emotion is his greatest weapon, yet Dredd gives him more of a moral fibre rather than a robotic overseer of justice.”

I can see him getting into it. He’s excited about this role, and it was definitely fun for him.

Urban insisted on doing his own bike stunts for the film and put on a raspy voice for the role. “Wearing the mask was challenging. That is essential to the character of Judge Dredd as he’s meant to be without character and prejudice. He’s faceless yet human, and that paradox is so hard to express to the audience as is, and is even more challenging when your face is taken away – it gives the acting a whole new dimension.

“It was uncomfortable, and it was meant to be. Dredd is an uncomforting character. I didn’t want it to be comfortable.”

Even though Urban has been cast in many films that can be considered to be the realm of geeks, he says he’s more of an outdoor person and definitely not a geek. “I love hiking, surfing and outdoors stuff. I hardly read comics or spent much time indoors. But I love playing the fantasy characters. They’re so interesting to get into.

“The character of Éomer was exciting, especially as young actor. I worked with people I’ve admired, and working with Peter Jackson was special... I had never read the book and read it during production. It was definitely a different process to the usual.”

Urban says although Dredd was amazing project and an excellent character to play, he hopes the world would never need a Judge Dredd. “It’s a brutal reality I hope never happens. It’s fun to explore in cinema, but I hope we never get to that stage where we need such administration of justice. It would be very sad.”