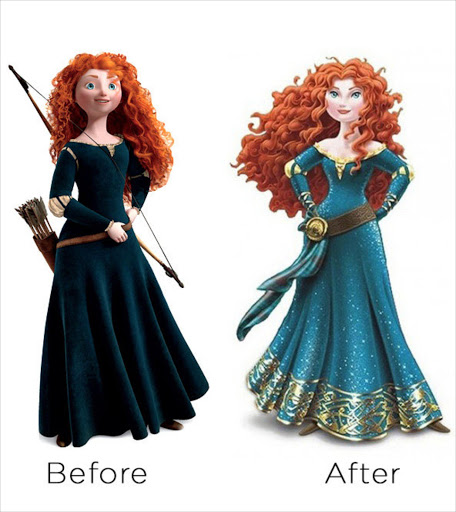 After facing criticism for its redesign of Merida from the hit animation ‘Brave’ – including by Brenda Chapman, the former director of the film – Disney has apparently pulled the new look of the character from its princess website, according to reports.

Disney has seen a wave of protests about the newly redesigned princess.

In the movie, the character is seen wielding a bow and arrow, while the new look Merida was given what one Jezebel writer deemed "a pretty pretty princess makeover" in appearance and dress, according to Hollywood Reporter.

"Numerous supporters have written to us to share the news that the new makeover version of Merida is no longer appearing on Disney.com," wrote Carolyn Danckaert, co-founder of the website A Mighty Girl, who launched the Change.org petition calling for Disney to "say no to the Merida makeover." The petition included a letter to Disney chairman Robert Iger.

“She had a uniqueness that people really loved, so when they took that away, it was a real affront to a lot of people,” Danckaert told Yahoo! Shine.

Danckaert solicited opinions from her Facebook followers before starting the petition, and said she was quickly bombarded with more than 800 comments, “overwhelmingly negative and very passionate.”

Signers of the petition, who include Peggy Orenstein, author of Cinderella Ate My Daughter, object to what they’ve called the sexualising of Merida’s image, in which the character now appears older, with a tinier waistline, sultrier eyes, a coquettish expression, tamed curls, and more exposed skin peeking out from a bedazzled, off-the-shoulder version of the constricting teal dress she so resented in Brave.

A Disney spokesperson offered the following official statement about the controversy to Yahoo! Shine: “Merida exemplifies what it means to be a Disney Princess through being brave, passionate, and confident and she remains the same strong and determined Merida from the movie whose inner qualities have inspired moms and daughters around the world.”

Chapman, the director of the Disney/Pixar film before being replaced by Mark Andrews during filming, agreed with the protests.

"Disney marketing and the powers that be that allow them to do such things should be ashamed of themselves," said Chapman to her local paper, the Marin Independent Journal.

"When little girls say they like it because it's more sparkly, that's all fine and good but, subconsciously, they are soaking in the sexy 'come hither' look and the skinny aspect of the new version. It's horrible!"

The new Merida character was unveiled as the 11th official princess at Disney World last weekend.

The Change.org Merida petition currently lists over 200 000 individuals who have signed the letter to Iger.

“My little girl has unruly curls, wants to climb trees, run with wind, and challenge stereotypes everyday AND she is only 4 years old,” writes one petition signer, Kerri Gaskin of Canada.

“How can I possibly tell her that her favorite character has given in and given up to become an overly sexualized pin-up version of her former self?”

“Merida was the anti-princess for all of us who don't wear makeup, let our hair rampage free, and prefer to wear real clothes that let us hike, climb mountains, and ride horses,” wrote petition signer Kris Dorman of Utah. “Please allow Merida to remain the fiercely confident young woman who doesn’t need glitter or skin to know she is of incredible strength and worth.”

Orenstein wrote about the redesign on her blog with a tone of resigned disgust, noting that, “in the end, it wasn’t about being brave after all. It was about being pretty.”

She continued, “I’ve always said that it’s not about the movies. It’s about the bait-and-switch that happens in the merchandise, and the way the characters have evolved and proliferated off-screen. Maybe the problem is partly that these characters are designed in Hollywood, where real women are altering their appearance so regularly that animators, and certainly studio execs, think it’s normal.”

For the parents who say that Merida is “only a cartoon,” asking, “Why does it matter?” Danckaert says, “It’s sending a message,” which is one that puts forth a very narrow definition of beauty.

“This is how children pick up cultural messages about what is important,” she adds. “Young children don’t really distinguish between reality and fantasy, and these characters are their role models.”