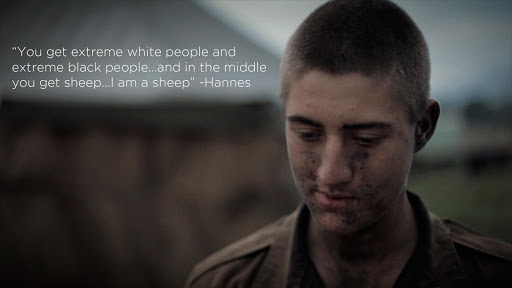 One of the characters in South African documentary feature, 'Fatherland'.
Image: Courtesy of Red Flag

A new South African documentary film is shedding light on military-style camps to train white, Afrikaans boys to defend themselves, and keep the spirit of Afrikaans nationalism alive.

Fatherland, directed and produced by filmmaker Tarryn Lee Crossman, tells the story of three boys on their nine-day stay and the right-wing military summer camp, which is run by ex-military soldiers, who fought for South Africa before freedom in 1994.

This film explores the fine line between patriotism and racism through a true story. The group, called Kommandokamps runs the camps four times a year.

Fatherland is a coming-of-age story about three white, Afrikaans boys who decide to spend their summer holidays doing basic military training, like their fathers did. But when they find themselves at a tented camp deep in the bush, hungry, tired and being indoctrinated by the old Afrikaans regime, they are forced to decide where they fit into the new South Africa.

Questions are raised about what does being true to their ‘Volk’ really mean, and is that even something that they, as good “boer seuns” should be questioning.

Fatherland explores ideas of identity, that fine line between cultural identity and prejudice. At the same time it explores this idea of what makes you morally bad, by looking behind the closed doors of pure race-based hatred. The film encourages viewers to understand how someone can hate another person because of the colour of their skin, religion, nationality or sexual orientation.