Farewell to Mandoza, the king of kwaito

“We knew he was sick. We knew it was serious. But we didn’t believe that he was actually going to die. Really die.” 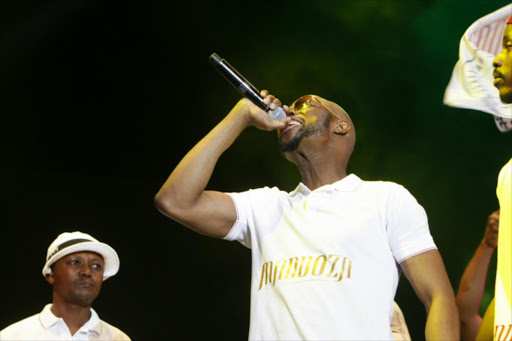 Those are the sentiments shared this weekend by family members of South African musician and kwaito king Mandoza and by many South Africans following the news of his death on Sunday.

Twelve days before, his family had made the startling announcement that Mandoza was “fighting for his life after having cancer treatment in 2015 … it has unfortunately metastasized to his brain.”

His wife, Mpho, downplayed the statement, though, saying his condition was serious but he was “okay”.

In fact, he was so “okay” that he even performed at the Thank You SABC concert on September 10, little more than a week before his death. Supported by family, friends, politicians and colleagues, a frail Mandoza bravely took to the stage. The footage quickly went viral.

But fans were concerned when the singer left the stage after performing just one song. His wife, who was present, said he had been booked to perform one song only and he was “tired but okay”.

Eight days later, Mzansi is mourning the loss of one of the country’s biggest musical icons.

Born in 1978 in Soweto, Mandoza was one of the first black artists to cross lines of colour at a time when the country still battling with the notion of a “rainbow nation”.

His hit song Nkalakatha, released in 2000 as the lead single and title track of his second solo album, was hailed as a unifier across the nation. It also catapulted him into stardom.

He had been in the entertainment business for a while after being part of the group Chiskop with his childhood friends Siphiwe (The General GTZ) Sibisi, Sizwe Motaung and Sibusiso Thanjakwayo, but it was the Nkalakatha album that put him on the map.

He won award after award and dominated the music charts. At the same time, his private life became tabloid fodder.

In 2003, just three years after he achieved super-stardom, Mandoza knew he had a problem. He checked into a rehab facility in Cape Town, admitting that the pressure that accompanied his solo career was just too much.

“At the clubs is where it's happening, that's where the dealing takes place. I used to spend R2,000 a week on cocaine only. This is very dangerous stuff, especially for spoilt kids who carry a lot of pocket money. My kind of drugs were the expensive kind, but there are some you could get at about R50, so kids are also in danger," he told IOL at the time.

While Mandoza battled to deal with his newfound fame, he also tried to bring his career back to life after his success in the early 2000s – but it was too late. Much of the hype around kwaito had already died down.

His personal life again took centre stage when he was involved in a serious car accident in 2008. Mandoza crashed his Chrysler SRT into the back of a Volkswagen Jetta on the N1 north near the Beyers Naudé Drive offramp in Johannesburg, killing two people.

He was found guilty on two counts of culpable homicide and given a suspended sentence of three years and nine months. He also had to compensate the two families, according to the Sowetan.

Two years later, another car accident put him in the headlines yet again. While initial reports said the singer had been driving a Mini Cooper at the time of the incident, police later said their investigations found Mandoza was not the driver and no charges would be laid.

The subsequent negative press did more damage to his career, yet it wasn’t necessarily the worst thing for Mandoza. He all but disappeared from the public eye. He rarely performed live, nor did he feature often at celebrity events.

Those close to the star said he was “angry” with the press about the “lies” being spread.

In between, he married Mpho, had three children and lived a quiet life in Soweto. He made the odd television appearance when cameras would follow him around for a “Mandoza special”, but he did not particularly enjoy the attention.

This was a new Mandoza. He had left behind the fame, the money and the success. The friends who in it only for his thick wallet were gone, as were his fellow musicians who had only paid attention to him when it suited them.

His neighbours would visit him at his home, share a drink and talk. They were there the days before his death.

Speaking to TMG Entertainment outside Mandoza’s house on Sunday on condition on anonymity, one of his neighbours said the singer’s friends and family had gathered on Saturday to celebrate his wife’s birthday.

“I am shocked. We are sitting together yesterday. It was for Mpho’s birthday and we were saying, ‘Mpho, we gonna chill tomorrow. Drink, be merry.’ I even said to her, ‘He will pull out of this.’ He was a fighter. He was always fighting. We were all praying.”

Mandoza’s son Tokollo Tshabalala said: “I’m happy that my dad died a proud man and had everything he wanted in life. He always used to say, ‘When I’m gone one day, I need you to be strong,’ and now I’m just trying to be strong.”

And strong is what all South Africans will have to be as they mourn the loss of their king of kwaito.