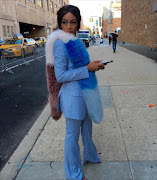 In an elaborate feature titled, The Rise of South Africa’s Golden Girl Bonang Matheba, the media personality opened up about her unstoppable success with Huffington Post's Melissa Mushaka.

During the interview, Bonang - who is celebrating 13 years in the entertainment industry - revealed that the experience (of speaking to one of the top international publications) is not something that often happens "for an average girl from Africa".

"It’s been a gradual process that has been every inch so fulfilling. God is just really moving through my life in ways that I can't even explain," she gushed.

She also explained how she applies one of her ideals, 'Starve Your Distractions, Feed Your Focus,' in her life, saying: "You need to grow so hard and so thick and so strong to a point where it doesn't matter what people think, you need to do what makes you happy".

She also, once again, sang Caster Semenya's praises, claiming that she is hugely inspired her, especially after her recent string of mammoth achievements.

"She inspires me, she’s younger than me but she inspires me. For somebody to achieve what she has achieved was just incredible. Starve your distractions and feed your focus because there was so many international media that was breaking her down. She is like the quintessential it is possible black African girl, if you STARVE your distractions and just feed your focus. And, I live on that!"

Bonang got the chance to hang out with a number of world-renowned faces during her stay in New York for NYFW, including but not limited to - Beyoncé's personal stylist Ty Hunter, Christina Milan, Kelly Osbourne and Claire Sulmers of Fashion Bomb Daily.