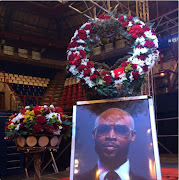 A public funeral service is currently underway at the Grace Bible Church in Soweto - the neighbourhood where Mandoza was born and bred.

After the service mourners will be transported to the Westpark Cemetery where the icon will be laid to rest.

When TMG Entertainment visited Mandoza's home in Pimville on Thursday evening the mood was sombre as community members sang religious songs and came together to help erect a white tent ahead of the funeral today.

Earlier this week hundreds of friends, family, fans and high-profile personalities gathered at the Ellis Park Arena to honour the late musician's memory.

Unlike most memorial services the mood was electrifying as the legend's life was celebrated with song and dance.

Close friend and MC Kabelo Mabalane at the service told mourners that Mandoza "lived life his way" and the memorial service embodied that.

Mandoza's body arrived at his home in Pimeville just after 4pm on Thursday afternoon for those close to him to spend one last night with the music legend.