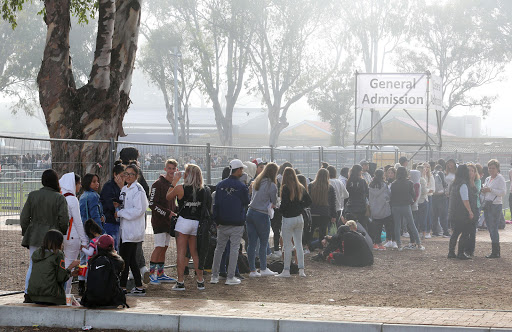 Young people were up at the crack of dawn to queue for Justin Bieber's concert in Cape Town on Wednesday night.
Image: RUVAN BOSHOFF

Hundreds of bunking teenagers and their mothers queued outside Cape Town Stadium on Wednesday‚ half a day before their idol Justin Bieber was due to take the stage.

Bieber arrived in the Mother City on Monday after performing in Johannesburg on Sunday and has been enjoying the autumn sunshine.

On Tuesday he was photographed jumping the queue at the Table Mountain Aerial Cableway‚ then walking around the top of the mountain with a bodyguard. It was reported that he had asked people not to take pictures but he did happily chat to those who recognised him.

On Tuesday night he reportedly aired a live Instagram video of himself playing pranks on guests at the One & Only hotel.