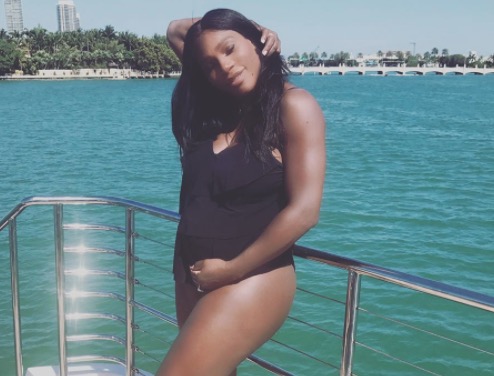 Tennis star Serena Williams who is on the cover of Vanity Fair's August edition has opened up about her pregnancy.

The tennis champion who posed nude on the cover shared a picture of it on Twitter and told fans that she is yet to find out if she is expecting a boy or girl.

"I’m waiting to find out but would love to hear your thoughts," she said.

During her interview with Vanity Fair, Serena said that if someone told her last year that she would be having a baby this year, she wouldn't have believed it.

Serena surprised fans with her pregnancy announcement in April by sharing a picture on SnapChat with the caption, "20 weeks".

She announced her engagement to Reddit co-founder Alexis Ohanian in December last year. This will be the couples first child together.

Here's a look at her fierce nude cover...

Must read article. Link in bio

Football legend Lucas Radebe is loving married life and is open to having more children with his wife Thobela Silver.
TshisaLIVE
4 years ago

Cassper Nyovest has reacted to reports that his ex Boity Thulo has found love in the arms of a new man, saying that he only wishes her happiness.
TshisaLIVE
4 years ago

IN MEMES: Somizi questions if Khanyi is black or caucasian?

Somizi had fans of his reality show in stitches on Wednesday night when he documented his recent trip to Zanzibar and took shots at his bestie Khanyi ...
TshisaLIVE
4 years ago

An artist hoping to break into the music industry has sparked shock and confusion after naming himself after award-winning musician Donald.
TshisaLIVE
4 years ago