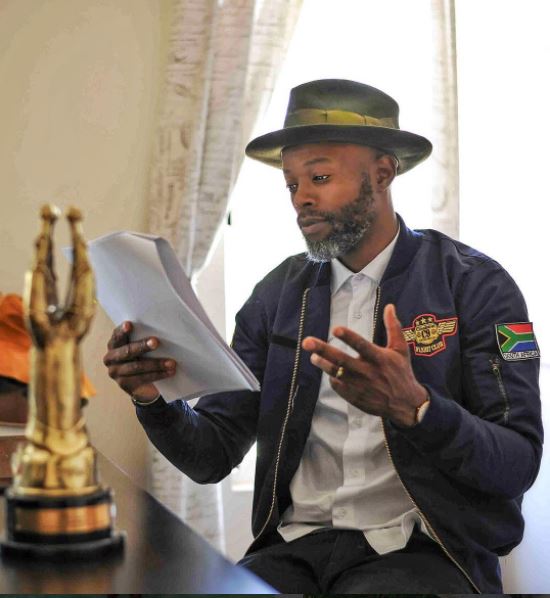 In order to bring his character on Broken Vows to life, Thapelo Mokoena stepped into the shoes' of activists such as Ernesto "Che" Guevara, Thomas Sankara and photo journalist Alf Khumalo.

Thapelo plays the character of Uhuru, a passionate writer who has pushed him to learn what it means to be a journalist. The actor who deals with the media on a daily basis admitted that he now views journalism in a different light.

“I found that journalism is such a unique space and I had to look at the little details that make a great journalist. I approached it from a messenger’s perspective because it is almost revolutionary what true journalists do,” he said.

Thapelo explained that from his research he found that journalists have the difficult decision of choosing what the way a story is told.

“I looked at revolutionaries and people like Alf that knew that a message had to be delivered and became creative in finding a channel to tell it. That is the type of journalist I would be and the one I choose to bring to life through Uhuru,” he said.

Perhaps also inspired by his passion for story telling, Thapelo yearns to outlive his legacy by sharing his skills with young people.

He has a number of projects he’s been pushing to ensure growth of the industry through development of young talent.

“I started the #BookYourFirstGig talks to help equip young people who are looking at entering the industry. We also have the mobile cinema initiative that we hope will grow to allow all South Africans exposure to locally produced films,” he said.

Fans have responded with shock and sadness to news that actor Pierre van Pletzen, famously known for his role as Oubaas on Afrikaans soapie 7de Laan, ...
TshisaLIVE
4 years ago

Mshoza will miss her mom who protected her against trolls

Mshoza is struggling to come to terms with her mother's death, and has shared that she feels lost because her mom protected her when people mocked ...
TshisaLIVE
4 years ago

Some of V-Entertainment's most famous hosts are set to reunite this evening for a massive one-hour long send off, but former TV star Nonhle Thema ...
TshisaLIVE
4 years ago